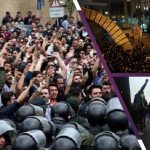 The explosive situation in Iran.

It has been commonplace for the state-run media to toe the official line when it comes to reporting on the economic conditions of Iran’s people. The situation has deteriorated so much in the last few years, compounded by the coronavirus crisis, that there have been several outspoken more honest comments by regime officials and the state-run media recently.

Mujahedin-e Khalq (PMOI/MEK Iran) has repeatedly stated that the situation in Iran has become a powder keg, ready to explode at any moment. The riots and protests in November last year were a foretaste of what is soon likely to happen.

An article published by the state-run Jamaran website on May 1st, International Workers’ Day, was a good example of critical thinking now emerging in the media. The article explores the devastating economic statistics of contemporary Iran and how the conditions that ordinary Iranian workers face have deteriorated since the Iranian Revolution in 1979.

According to the article, the 40 years since the revolution have seen a steady inflation rate and the erosion of both the middle class and working-class living standards. Many middle-class Iranians, for a start, have become workers, especially university graduates, who have turned to do anything to make a living. Workers, meanwhile, have suffered from a steady loss in the value of their wages because of the substitution of workers’ unions by state-run unions, which do not in reality fight for the rights of their members. Because of these fake unions, workers have no bargaining power and have become defenseless in terms of maintaining the level of their wages.

These are some of the statistics quoted in the article:

If you look at these sorts of figures, it looks as if the average worker in Iran is only earning in real terms about a quarter of what they were earning in 1979. So many basic items have increased in price by a factor of anywhere between 3,000 and 9,000, because of inflation over the last 40 years. At the same time, the average worker’s wage has only increased by about 900 times.

Iranian people are fed up with this corrupt regime that puts its own interests first.https://t.co/BaR3xQCrR8#Iran #MEK #coronavirus @USAdarFarsi pic.twitter.com/m0XUNF8zc3

These statistics are even gloomier when you consider that they only apply to the 12 to 13 million ‘official’ workers in Iran. In addition to these workers, there are also a further 5 million ‘unofficial’ workers. These are the truly ‘forgotten’ toilers of the nation, who work for a pittance, have no insurance or social welfare. These dismal figures are the total of workers’ achievements made possible by the mullahs’ regime over the last 40 years.

It’s no surprise, then, that the children of these workers, most of whom are without jobs, took to the streets last November when the fuel prices spiked suddenly. All the socio-economic indicators seem to be pointing to the next explosive series of protests happening soon. Oil revenue is near zero, the budget is operating at a 50% deficit and the regime has been forced to print money to pay for anything. The result, of course, will mean spiraling inflation leading to a further reduction in workers’ real income. “Will anyone listen? Is there a will to bring the country out of this bone-breaking deadlock?” asks the article.