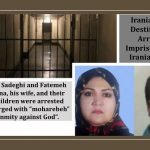 Iranian Family Destitute After Arrest and Imprisonment by Iranian Regime

Written by Mohsen Aboutalebi on August 25, 2020. Posted in NEWS 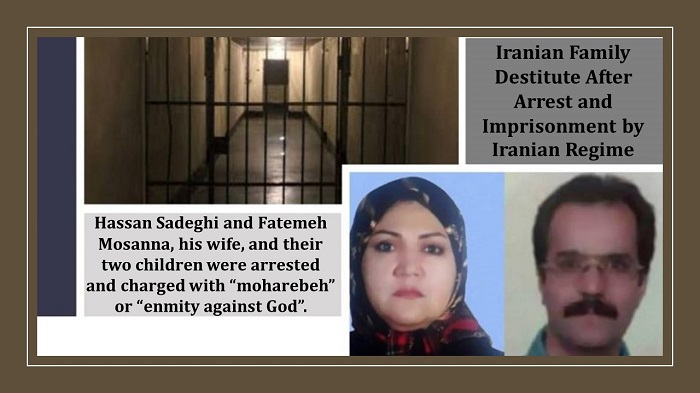 Fatemeh Mosanna, who had no direct affiliation with the (PMOI / MEK Iran), has been attacked because of their family connections.

On January 28th, 2013, an Iranian family has torn apart when regime forces arrested them while they were attending the funeral of Hassan Sadeghi’s father. Gholam Hussain Sadeghi,  Hassan’s father, had died earlier that month. He had been a member of the People’s Mojahedin Organization of Iran (PMOI / MEK Iran), but despite the fact that Hassan’s family was not political, the regime decided that the mere association at the funeral proceedings was enough to arrest them.

For holding a funeral service for Hassan Sadeghi’s father, a member of the Iranian Resistance #MEK, Fatemeh & her husband were sentenced to 15 yrs in prison.

Hassan Sadeghi and Fatemeh Mosanna, his wife, and their two children were arrested and charged with “moharebeh” or “enmity against God”. The two young children were soon released, but the couple was separated and imprisoned in separate prisons. Their home was confiscated by the regime and both were sentenced to 15 years in prison.

Fatemeh Mosanna has hardly ever seen her husband since her arrest and imprisonment. She has recently been hospitalized at Taleghani Hospital in Tehran due to a deteriorating health condition. She was still handcuffed to her hospital bed while receiving treatment. Her children attempted to see her while she was in the hospital, but this was not allowed.

This couple and their family are innocent victims of the repression meted out to anyone in Iran who supports the resistance movement, especially the MEK. Even people like Hassan Sadeghi and Fatemeh Mosanna, who had no direct affiliation with the MEK, have been attacked because of their family connections.

#Iran: Fifteen Years in Prison, Confiscation of House and Property and Disintegration of a Family on Charges of Supporting the #MEK#HumanRights https://t.co/jT44WCcukk

Thousands of Iranians have been arrested, tortured, imprisoned, and executed because of their support for the MEK. At the same time, the regime has instituted a public campaign of disinformation targeted at anyone sympathizing with the MEK. Outside of Iran, propagandists spread the message that the MEK is not popular.

Despite the barrage of negative propaganda, the MEK clearly has a strong presence in Iran, with the resistance units having a large input into recent uprisings and protests across Iran.

Even the Supreme Leader, Ali Khamenei, begrudgingly acknowledged the support for the MEK within Iran, especially amongst the youth.

A statement from this group back in April read “as of Monday, April 20, 2020, efforts have been made to collect signatures addressed to the Government and the Ministry of Foreign Affairs of Albania requesting visas for families to visit their loved ones… In the second week, the representatives of the Rescue Association became widely active in 27 provinces of the country. Signatures were made from various cities in Iran and even from other countries.”

It is attacks against ordinary innocent Iranian families like those of Hassan Sadeghi and Fatemeh Mosanna that expose the dangerous lies of the regime. The reality is that the regime has no love for the MEK and will do all in its power to destroy it.

I salute women political prisoners in #Iran who persevere despite catastrophic prison conditions and under criminal pressures. I urge the UN High Commissioner @mbachelet to take urgent action to save their lives. This is a flagrant violation of human &women’s rights.