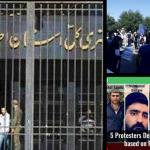 Written by Esmail Mohades on August 1, 2020. Posted in NEWS 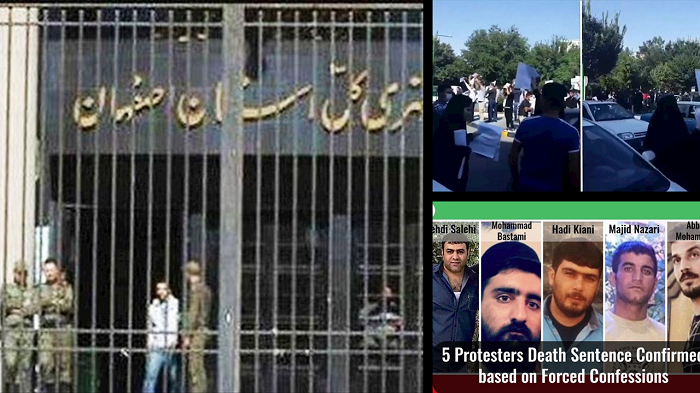 MEK Iran: Families of Death Row Victims of the November 2019 Uprising Gathered Outside the judiciary in Isfahan.

On Wednesday morning, 29th July 2020, death row families assembled outside the judiciary in Isfahan. They were staging a protest following the unjust rulings giving the go-ahead for executions to take place of those who have taken part in street protests. They are demanding that the victims go through a fair and open-door trial. The media must also be present so that the trials can be overseen by a neutral viewer.

Unfortunately, the regime does not support the intentions of the group and so it sent out security forces to wage a vicious assault on the peaceful protesters, which included hitting the people with batons.

Five people set to be executed

The Supreme Court in Isfahan has named five young men who will be murdered by the regime. They include:

While being questioned in court the five said that they were forced to confess through the use of torture. There is some evidence available that suggests each of the five men has been sentenced with two death penalties. One is for “waging war against God” while the second baghi is for ‘’taking up arms against the government”.

The indictment in court stated that the five protesters have been charged with baghi due to the efforts they have used to ensure their protests were successful including shooting at officers and disrupting public order by disturbing the public’s attitudes.

There has also been another incident when the Iran Supreme Court recently endorsed the death penalty in Tehran against three young men for taking part in the November 2019 nationwide protests. However, these executions were delayed while the cases were reconsidered based on the wishes of the young men. However, this didn’t happen and the men were executed and their lawyers only got the chance to access the court papers and the evidence that was being used against them when they had already been executed.

The Iranian regime goes ahead with these outdated draconian measures as a way of trying to prevent any further protests.

I urge the international community, especially the United Nations Secretary-General and other #HumanRights organizations to intervene immediately to stop the executions, secure the release of the prisoners, and prevent a major humanitarian catastrophe in prisons #Iran pic.twitter.com/6KGQDzPQm0

Mrs. Maryam Rajavi, the president-elect of the National Council of Resistance of Iran (NCRI), has condemned the execution of Kurdish prisoners. She has referred the matter to the United Nations Security Council, the UN Secretary-General, the High Commissioner on Human Rights, and the UN Human Rights Council, demanding that the international community takes action against the religious fascism and the torture, executions and arbitrary arrests that are taking place indiscriminately.

Locals and the families of five protesters sentenced to death gathered on July 29 outside the Nikbakht Judiciary in Isfahan, central #Iran to stop the executions.#StopExecutionsInIran#لغو_فوری_اعدام #اعدام_نکنید https://t.co/tSd2BtA43m pic.twitter.com/bl2mzulpND

In her own words she said “by these executions, the clerical regime seeks to terrorize the people of Iran in the face of their protests. At the same time, they seek to boost the spirit of their mercenary agents and recruit their families for espionage and suppression of the public.”

During the uprising in November 2019, the mullahs’ regime responded with brutality and shocking violence. The Iranian opposition to the Mullahs regime – the People’s Mojahedin Organization of Iran (PMOI / MEK Iran) – has counted the deaths of at least 1,500 people (which has certainly increased in the past few months because of seriously injured protesters who have since died as a result of their injuries). Many more thousands of people were injured and even more, were arrested and imprisoned.

#UPDATE
Some reports claim the death sentences for all five prisoners arrested during Dec 2017/Jan 2018 uprising have been suspended until further notice.
Isfahan judiciary chief: "Final ruling has not been issued on this case."#StopExecutionsInIran#لغو_فوری_اعدام#اعدام_نکنید pic.twitter.com/xUj8UDYvzl