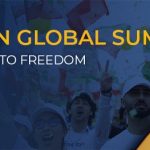 World’s Largest Gathering’ to Be Held on Friday for a Free Iran by the (NCRI) and the  (PMOI / MEK Iran),

On Friday, July 17, tens of thousands of people from 102 countries will gather for the Free Iran Global Summit. The National Council of Resistance of Iran’s (NCRI) annual conference will be a virtual experience, connecting 30,000 locations across the world, and featuring at least one thousand prominent political figures and dignitaries from five continents. Organizers say that this year’s conference will be the largest online gathering in history.

The Free Iran gathering is held annually to support the Iranian people’s call for a free and democratic Iran. This year’s event comes during a period of chaos and destruction in Iran. The economy is on the verge of collapse, and coronavirus infections rage across the country due to a politically-motivated decision to conceal the virus prior to a regime election and an economic decision to re-open the country before it was safe to do so.

Widespread anti-regime sentiment hit a tipping point in November 2019 when the government raised gas prices without warning. Millions poured into the streets to protest for the end of the regime. Protests erupted again in January 2020 in response to the regime’s coverup of its involvement in the downing of a Ukrainian airliner. The regime’s response to the coronavirus pandemic has led to even more resentment, causing many authorities to warn of a new uprising.

The Free Iran Global Summit provides an opportunity for the international community to build on this moment and support the Iranian people in their goal of a secular and democratic Iran. The event will also stress the importance of creating a firm policy on Iran. Finally, the summit will pay tribute to the more than 70,000 Iranians who have lost their lives to the coronavirus pandemic.

MEK supporters in about a dozen world capitals will hold in-person gatherings. Attendees at these events can participate in-person and watch the broadcast of the virtual summit on giant displays and LED screens. Berlin, Washington, D.C., and Paris are among the cities hosting in-person gatherings this year.

The MEK’s Resistance Units inside Iran will also send a message to the conference. This is significant both because the regime’s harsh censorship laws make such activities dangerous, difficult, and illegal, and because the MEK is a banned organization in Iran. The MEK Resistance Units have greatly expanded their influence over the past few years, and they have proven they are willing to stand up to the ruling regime.

The Free Iran Global Summit will be live-streamed in Farsi, English, and Arabic and can be viewed at the following links: