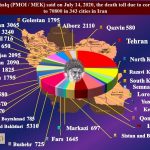 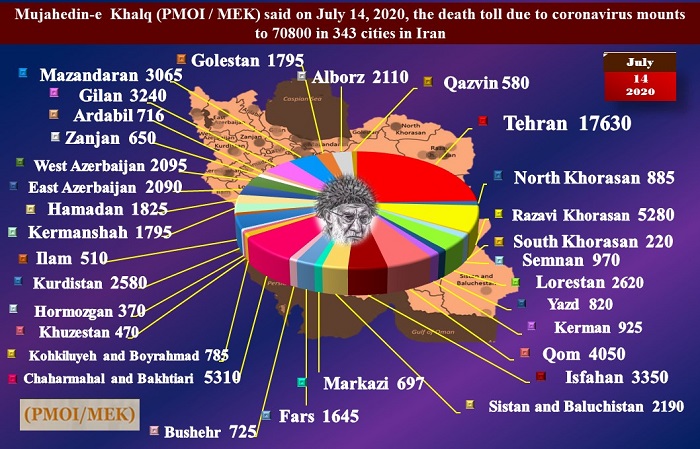 (PMOI / MEK Iran): Many officials are reporting that cases of coronavirus have increased dramatically

The People’s Mojahedin Organization of Iran (PMOI / MEK Iran) reported Tuesday that 70,800 people have died from coronavirus in Iran, while the official death toll released by the regime (13,032) remains around one-sixth of the true figure.

The death tolls for the provinces are:

Of course, this does not include figures from provinces that did not report an increase overnight.

The Health Ministry spokesperson said Monday that 203 people had died from coronavirus in the previous day and that 3,375 people were in intensive care units, on the verge of death. Furthermore, 72% of new coronavirus cases in Iran end up in the hospital on the first day, with the number of hospitalizations increasing as a result.

Alireza Naji, head of the Masih Daneshvari Hospital Research Centre, criticized the regime for previously bragging about having enough testing kits, which meant that they did not need any from the World Health Organization because Iran is now having to buy testing kits from abroad after running out of the raw materials domestically.

Many officials are reporting that cases of coronavirus have increased dramatically since April, which is when the regime abandoned its lax and late lockdown to send people back to work with the hope of suppressing protests over the economy. Instead of paying people to stay home and flatten the curve, the regime left them to fend for themselves, which meant a lack of food on dinner tables.

Much medical staff is warning that they are at a breaking point with full hospitals, rising infections, and sick colleagues. The head of Kermanshah province Health Centre said Monday that Iran is still at the peak of cases.

More than 70,800 people have died of the novel #coronavirus in 343 cities checkered across all of Iran's 31 provinces, according to the Iranian opposition PMOI/MEK.

Meanwhile, the regime’s concerns over nationwide uprisings are growing, as disparities are exacerbated by the crisis. An example is that the wearing of masks is encouraged but poor people cannot afford them and they’re not being donated for free.

On state-run paper wrote: “The government let the people loose for the sake of the economy and is now terrified of riots by the hungry!… The lower class, due to many unresolvable problems, has no choice but to pour into the streets for protests… And since they believe that their voices are not being heard by the officials, they are even more urgent in this regard… If officials don’t think of a solution, there will be protests in the future and we can no longer stop the people.”

Mrs. Maryam Rajavi is the President-elect of the National Council of Resistance of Iran’s (NCRI): The rapid rise in the number of COVID-19 victims is the strategy of mass casualties to forestall the danger of an uprising and their overthrow.