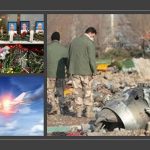 Written by Amineh Qaraee on February 3, 2020. Posted in NEWS

“We are approaching from the north, 3768. Flares like a missile. Is there something there?” asked the pilot of flight 3768 of the Air Aseman airlines from the control tower of Tehran’s international airport early morning Wednesday, January 8.

“How many miles away? Where? We were not informed of this. How does it look? What does this light look like?” answered the control tower dispatcher.

“I can’t say for sure. But I think it is near (airport) Payam, (city) Karaj. I now see the light as it flies from there. That’s exactly the light from a rocket,” answered flight 3768 pilot.

“Aseman” 3768, you see nothing else up there?” the dispatcher asked the first plane.

“We saw an explosion, a big flash from the explosion, we do not understand what it is,” answered the pilot.

That flash, and the explosion, was one of two surface-to-air missiles fired by the Islamic Revolutionary Guard Corps (IRGC) hitting Ukrainian flight 752 that had taken off from Tehran International airport a short while before that. 167 passengers and 9 crew were on board, none survived.

The audio recording of radio communications between the Aseman flight and Tehran International Airport control tower was released early Monday morning by the Ukrainian TSN website. The website cited “special services” as source for the information.

Suspicions are raising over Iran’s continued denial over the Ukrainian airliner crash#Iranhttps://t.co/3CFY40dQUo

Soon after, Hassan Rezaifar, director in charge of accident investigations at Iran’s Civil Aviation Organization said that Iran would no longer share evidence from airline crash with Ukraine, like that news “risk to be leaked to the press.”

“In a strange move, the technical investigation team of the Ukrainian airline crash published the secret audio file of the communications of a pilot of a plane that was flying at the same time as the Ukrainian plane,” Rezaifar said, according to the official Mehr news agency.

“This action by the Ukrainians led to us not sharing any more evidence with them,” he added.

“The disclosure of the audio makes it clear that the control tower, and by extension the regime’s Civil Aviation Organization (CAO), had been immediately informed of the shooting down of the Ukrainian passenger jet,” said the National Council of Resistance of Iran (NCRI), Iran’s main opposition comprising the Mujahedin-e-Khalq (PMOI/MEK Iran), in a press release.

“The CAO is an agency of the Ministry of Roads and Urban Development. There is no doubt that Hassan Rouhani was notified of the cause of the crash through government channels. But he waited 72 hours before admitting this horrific crime. His spokesman, a former deputy intelligence minister, Ali Rabiee, falsely claimed that the government was told of the cause of the crash on the afternoon of January 10, 2020,” continues the NCRI communique.

More than a month after the incident, the Iranian regime refuses to hand over the plane’s black boxes to relevant authorities in Ukraine and Canada.

The international community must hold the Iranian regime, in particular, Ali Khamenei, regime’s Supreme Leader, accountable for downing an airliner. Families of the passengers cry for justice.