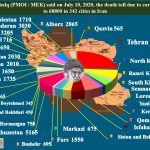 Written by Jennifer Jones-Kelley on July 11, 2020. Posted in NEWS 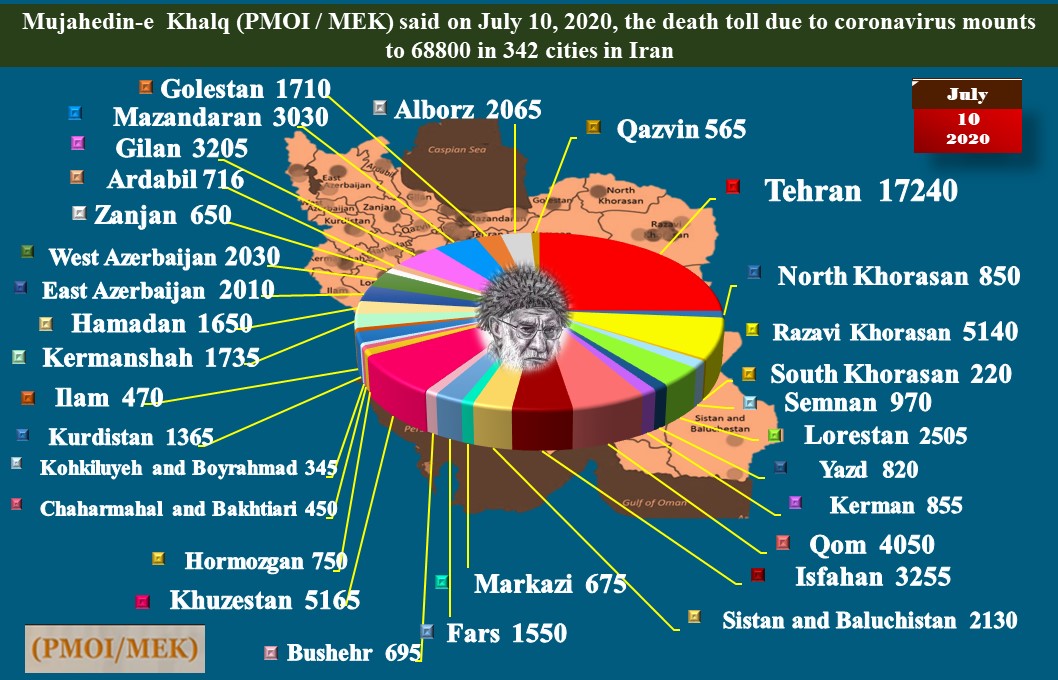 On Friday, July 10, the (PMOI / MEK Iran) reported that more than 68,800 people in 342 cities in all 31 provinces in Iran have died from the novel coronavirus. The regime confirmed 221 new deaths and 3,324 severe cases on Friday, setting a new record.

President Hassan Rouhani once again blamed the rising death toll on “the failure to take the restrictions and instructions seriously by people, particularly in friendly gatherings and unions such as weddings and mourning.” Rouhani, as the (PMOI / MEK Iran) previously reported, prematurely ordered Iranians back to work in mid-April while the first wave of infections was still underway, ignoring the Health Minister and National Coronavirus Combat Taskforce (NCCT).

#Iran: #Coronavirus Death Toll in 342 Cities Exceeds 68,800
According to doctors’ reports, at least 250 Coronavirus patients have died in Sina, Be’ sat, Beheshti, and Social Security hospitals in Hamedan Province from June 21. https://t.co/ywX55ubG1M

This decision led to the second wave of infections and deepened public resentment, creating widespread fear among regime leaders of a new uprising. Rouhani has since tried to blame the Iranian people for their own deaths to evade responsibility. He was unprepared, however, for the angry response, he received from his own Minister of Health.

In a Wednesday interview with the state-run IRNA, regime Health Minister Saeed Namaki spoke out against the regime in its entirety for its failure to respond to the coronavirus pandemic. He said, “We only received less than 30 percent [of the $1 billion that Khamenei allocated]…Why should I, as Minister of Health, have a soft tone in the face of a high-ranking authority? Due to using some unprofessional remarks… I didn’t show up in front of the camera for a long time, because I was both angry and heartbroken … Instead of saying don’t worry, leave the economy to us and deal with the disease, the Minister of Health, who should only focus on health issues, had to pay more attention to the economy as opposed to public health. I had to tell staff to write protocols on how to reopen, instead of on how to lockdown and impose limitations. We read the security reports. It is a serious issue that people are reaching a point of the eruption from poverty. The President and the security forces must think about (people’s) livelihoods to prevent an eruption.”

More than 68,800 people have died of the novel #coronavirus in 342 cities checkered across all of Iran's 31 provinces, according to the Iranian opposition PMOI/MEK.

Saeed added, “I have a Coronavirus diary, and it will be published if my life allows,” and “If my dear colleagues’ endeavors are undermined in any way, I will be forced to say things that could well be beyond tolerance…”

On Wednesday, Alireza Zali, a member of the NCCT in Tehran, commented to the state-run Shabakeh Khabar TV on the bureaucratic disaster complicating healthcare in the province. He said, “So far 4,400 health and medical personnel at universities have been infected… The distributed financial incentive packages have been seriously reduced due to difficulty in payment of the subsidies and personal incomes… A hidden discontent because of the non-payment of financial incentives exists… Because of a strategic error, Tehran was never declared red… Work in Tehran must be suspended for a full week… If this does not suffice, we must impose a lockdown in Tehran.”

On Thursday, the state-run Khabar Fori website published an ominous article predicting even further chaos and death. It said, “Coronavirus is a time bomb in Tehran which will explode soon… The situation is getting worse in the capital by the day. The head of Khomeini hospital complex said the more worrying issue is that the number of patients in need of hospitalization in ICU is more than normal patients, comprising some 40 percent. Also, the number of patients using ventilators has increased.”

Mrs. Maryam Rajavi is the President-elect of the National Council of Resistance of Iran’s (NCRI):

The rapid rise in the number of Coronavirus victims is the strategy of mass casualties to forestall the danger of an uprising and their overthrow.