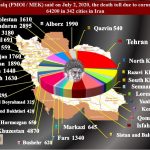 Written by Jennifer Jones-Kelley on July 3, 2020. Posted in NEWS 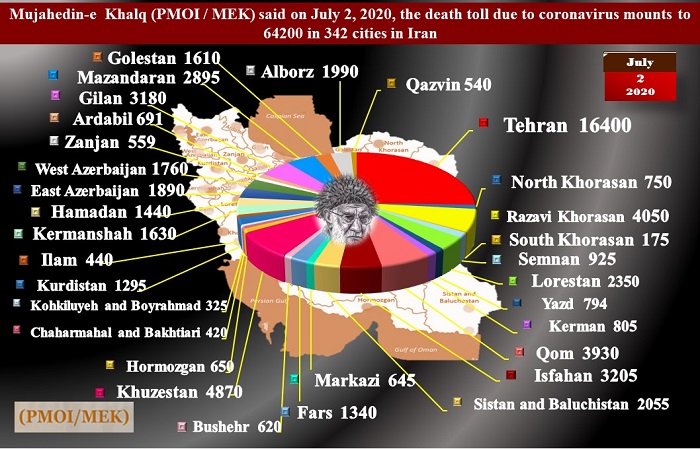 (PMOI / MEK Iran) reported that more than 64,200 people in Iran have died from the novel coronavirus.

On Thursday, July 2, the (PMOI / MEK Iran) reported that more than 64,200 people in 342 cities in all 31 provinces in Iran have died from the novel coronavirus.

Regime President Hassan Rouhani has been forced to acknowledge the severity of the crisis, after claiming six weeks ago that the regime has successfully managed and controlled the virus.

Rather than take responsibility for prematurely lifting quarantine restrictions and forcing Iranians back to work while coronavirus infections still surged, Rouhani blamed the second wave of infections on “parties, weddings and mourning ceremonies” and “non-compliance with social distancing in public transport.”

While Rouhani is quick to blame Iranians for their deaths, the MEK predicted when the country was reopened that the second wave of infections would soon follow as a result of the regime’s decision to ignore the wellbeing of its citizens.

Officials in Tehran are reporting high numbers of young people with severe cases of coronavirus. On Wednesday, the head of Khomeini Hospital told the state-run ISNA that a significant number of ICU patients are under the age of 30. An employee of the Behesht-e Zahra Cemetery in Tehran commented that the virus had not spared the young in comments to the state-run television channel 2, saying, “We have buried 16-17 victims under the age of six… we are getting busier here every day.”

ISNA also reported, “‘Officials reiterate that ‘the situation in Tehran is worrying and people need to pay more attention,’ but the reality is that hospitals are full of critically ill patients and overwhelmed doctors and nurses.”

According to the state-run IRNA, on Wednesday, the President of the University of Medical Sciences in Golestan Province said, “All hospitals in Gonbad Kavus are full, and the beds in Aq-Qala city are almost fully occupied.”

On Thursday, the Deputy President of the Medical Sciences University in Zanjan discussed the current situation in the province’s hospitals with the Revolutionary Guards (IRGC)-affiliated Fars news agency. He said, “Appraisals show the possibility of 85 percent of the population in the city of Zanjan getting infected. All leaves were canceled until further notice, and some hospitals can no longer admit patients. Currently, Zanjan’s hospitals have 2,000 beds. Vali Asr Hospital is full, and other hospitals are overflowing.”

More than 64,200 people have died of the novel #coronavirus in 342 cities checkered across all of #Iran's 31 provinces, according to the Iranian opposition PMOI/MEK. pic.twitter.com/oJX7lJHm5y

In a Wednesday interview with the Fars news agency, the President of the Medical Sciences University in Sirjan, Kerman Province raised concerns about the ability of healthcare workers to effectively provide patient care due to rising infection rates among staff. He said, “Increase in the volume of work and fatigue among colleagues, nurses, and physicians, due to the increase in the number of those ill has caused less protection for colleagues. This, in turn, has led to the personnel to get sick and reduce the effectiveness of the system.”

In an interview with ISNA on Thursday, the President of Minab Hospital announced that 72 hospital staffers have been infected with the coronavirus. He went on to say, “Minab Hospital is the largest medical center in East Hormozgan. It has 96 beds, which has now increased to 116. In practice, the number of beds for hospitalizing the patients has reached 300. To get to that capacity, we have been compelled to use beds from the maternity ward.”

The President of the Medical Sciences University in Lorestan Province reported that the province is quickly running out of beds in comments to the Aflac television station on Wednesday. “We have 169 ICU beds, 155 of which are being used. We set aside 14 beds for extraordinary cases. We don’t have any empty beds in Khorramabad,” he said.

Mrs. Maryam Rajavi is the President-elect of the National Council of Resistance of Iran’s (NCRI): The mullahs regime’s crimes, depravity, incompetence, and corruption can be terminated only through the force of popular revolts and uprisings to overthrow the mullahs’ religious dictatorship and replace it with popular sovereignty and democracy.