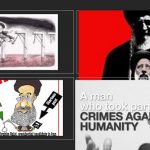 Raisi personally ordered the executions of thousands of MEK members.

Earlier this week, two former members of the regime’s notorious “Death Committees” justified the mass execution of 30,000 political prisoners during the summer of 1988. The two war criminals invoked the 1988 Massacre of (PMOI / MEK Iran) members in separate remarks commemorating the death of regime founder Ruhollah Khomeini.

“At a meeting that I attended with three or four of our colleagues with [Khomeini]. There was a report regarding a number of these cases. When we were leaving, we were all thinking that [Khomeini] is more revolutionary than us. We had gone there to say we are doing this and that… thinking [Khomeini] may say we are going too far. We saw that [Khomeini] is many steps ahead of us and not only did he encourage us, he also said we should pursue these measures with a far more serious drive, and not just in Tehran, but in all other provinces,” he continued.

Raisi personally ordered the executions of thousands of (PMOI / MEK Iran) members in Tehran after minutes-long trials. Anyone who refused to denounce the (PMOI / MEK Iran) was sentenced to death and executed immediately. Prisoners were executed in groups throughout the day, and their bodies were hauled in trucks and dumped in unmarked mass graves. This is what Raisi meant when he said that he worried that they were “going too far.”

#Iran: A member of regime’s Supreme Judicial Council during the 1988 #Massacre, Morteza Moghtadai: “many asked why so many [MEK supporters] have been executed…we obeyed the Imam [Khomeini’s] orders…Imam said to execute even those #MEK supporters that are firm in their beliefs" pic.twitter.com/DZAg7MHfoQ

On Monday, June 1, Morteza Moghtadaei, another former Death Committee member commented on the 1988 Massacre. “At the time we were constantly criticized about the high number of executions… There was something even more important, and I don’t want to mention any names, about one of the officials that lived next door to us… he tried to give me some advice by saying we should refrain from jailing and executions. I said these are orders from [Khomeini] and we follow his orders. Go talk to [Khomeini] and we will stop… I told him that [Khomeini] himself ordered us to continue and to do so with the utmost seriousness. Even these (PMOI / MEK Iran), those who will not repent, [Khomeini] emphasized if they are released from our prisons today, there will be bombings tomorrow. This was [Khomeini’s] specific orders to us and we carried out our measures based on his orders,” he said.

“Unfortunately, there is a serious question about how is it that terrorists who were in blacklists just a short while ago, both in Europe and the U.S., how are they now of the terrorist lists due to behind-the-curtain political agreements. And now they are collaborating with them and even providing refuge for them. We should get to know them (PMOI / MEK Iran) as [Khomeini] knew them,” he concluded.

The longer the dream of regime change is deferred, the more “stick wielders” and “hanging judges” will pack the upper echelons of the Iranian regime.https://t.co/3wellj5ryi #Iran #MEK #IRGCTerrorWithoutBorders #coronavirus @USAdarFarsi pic.twitter.com/nuoyLSZTbZ

Raisi’s words are particularly ominous considering the regime’s crackdown on dissent after the uprisings in recent years, but it is also another in a series of admissions by regime officials that the (PMOI / MEK Iran) is a serious threat to the mullahs’ rule. The days of claiming that the (PMOI / MEK Iran) is a fringe group without mainstream support are over, and regime leaders have accepted that.