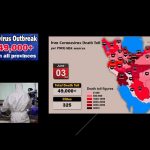 Written by Jennifer Jones-Kelley on June 4, 2020. Posted in NEWS 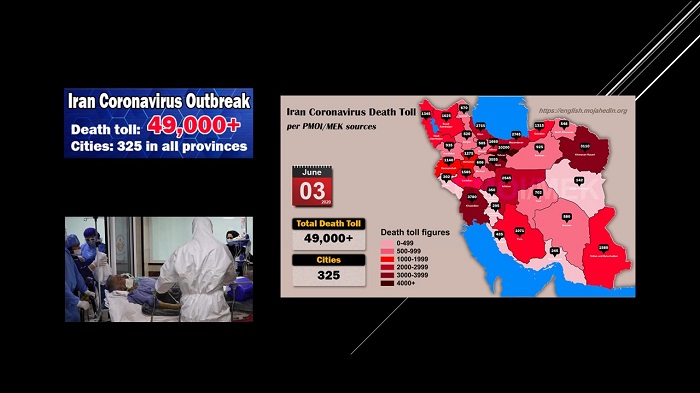 On Tuesday afternoon, the MEK Iran announced that more than 49,000 people in 325 cities in all 31 provinces in Iran have died from COVID-19, the disease caused by the novel coronavirus. Health authorities across the country are now warning that this “second peak” of infections that has overwhelmed hospitals will worsen in the coming weeks. A spokesman for the regime’s Ministry of Health described the situation in Hormozgan, East and West Azerbaijan, Kurdistan, Kermanshah, Bushehr, Sistan and Baluchestan, Qazvin, and Khorasan Razavi provinces as “alarming.”

More than 49,000 people have died of the novel #coronavirus in 325 cities checkered across all of #Iran's 31 provinces, according to the Iranian opposition PMOI/MEK. pic.twitter.com/c7aWb7R3MQ

Reported deaths by province include:

Alireza Zali, the head of the National Coronavirus Combat Taskforce (NCCT) in Tehran, provided the regime’s official report of new hospitalizations in Tehran Province to the state-run ILNA on Monday, June 2. “Last night, 261 Coronavirus patients were admitted to ordinary hospital wards and 73 patients with acute conditions to Intensive Care Units,” The MEK Iran has repeatedly stressed that the regime’s figures are an undercount of the true number of coronavirus cases, but even the official count is alarming.

The worrying news is that the number of new cases of #Covid_19 is on the increase There were 3117new cases of infection according to a health ministry spokesperson Kianush Jahanpour in the last 24 hours alonehttps://t.co/dZHTr6yeLG #Iran #MEK #Iranian #coronavirus @USAdarFarsi pic.twitter.com/FQUaRja7vc

On Tuesday, the head of the Information Committee of Kermanshah University of Medical Sciences expressed concern about the number of hospitalized patients in Kermanshah Province. “Every day, the number of Coronavirus patients admitted to the Province exceeds 200. Yesterday 243 people were hospitalized,” he said to the IRGC-affiliated Fars news agency.

Hossein Farshidi, President of the University of Medical Sciences in Hormozgan Province, expressed concern about the worsening situation in Hormozgan in comments to state television on Monday. “In cities like Bandar Abbas, we are looking to use hotels to quarantine infected patients. Bandar Abbas and Minab have been declared red by the NCCT, and in our opinion, Roodan and Qeshm are also red. The cities of Hajiabad and Bandar Khamir are also considering declaring red. So far, 123 health care and medical staff in the Province have contracted with Coronavirus,” he said.

On Monday, the President of Shiraz University of Medical Sciences in Fars Province said, “We are facing a sudden increase in the spread of the virus, and Fars Province has now reached the alerting stage,” according to the Fars news agency.

On Monday, the Deputy Governor of Bushehr Province told the state-run IRNA: “Today, we have set a record in the rate of infection, and if this trend continues, we predict, hitting higher and worse records.”

The Governor of Iranshahr, Sistan and Baluchestan Province has reinstated quarantine restrictions in an effort to slow the spread of coronavirus in the city. On Tuesday, he announced, “Starting from today, the city’s market will be closed for ten days due to the spread of the Coronavirus transmission chain,” according to the state-run Tabnak website.

#Iran #Coronavirus Outbreak: Since the beginning of the #Covid_19 crisis, the regime’s officials, particularly supreme leader Ali Khamenei and President Hassan Rouhani, have been conducting a cover-up policy parallel with negligence and inaction.https://t.co/PnONQkdfBh

The second wave of coronavirus infections is well underway in West Azerbaijan Province. On Tuesday, the President of the Medical Sciences University in West Azerbaijan Province announced that the number of coronavirus cases in the province had increased to 6,057. “The figures for the recent week show an increase in the number of people hospitalized in medical centers and those who died because of Coronavirus in the Province,” he added, according to the Fars news agency. State television and radio both acknowledged the crisis in the region on Tuesday, reporting, “The alarm bell for the second wave of Coronavirus in West Azerbaijan sounded. The upward curve of those infected in Mahabad is concerning.”