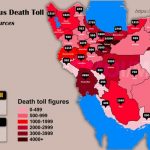 Written by Jennifer Jones-Kelley on June 2, 2020. Posted in NEWS 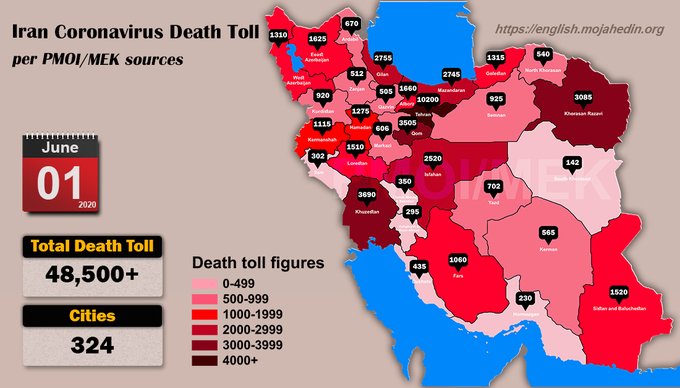 More than 48,500 people in 324 cities in all 31 provinces in Iran have died from COVID-19, the disease caused by the novel coronavirus, according to a Monday announcement from the MEK. The regime has confirmed 7,878 deaths, a number its own health authorities have acknowledged is an undercount of the actual figure. The regime confirmed 81 new deaths between May 31 and June 1, the highest number of fatalities it has acknowledged in 35 days.

More than 48,500 people have died of the novel #coronavirus in 324 cities checkered across all of #Iran's 31 provinces, according to the Iranian opposition PMOI/MEK. pic.twitter.com/B3RoEzBJmq

The total number of deaths by province includes:

Provinces across Iran are reporting a surge of coronavirus hospital admissions and deaths following the regime’s failed attempt to lift quarantine restrictions and force Iranians back to work. While regime President Hassan Rouhani has publicly declared that the virus is under control and vowed to reopen stadiums and cultural centers in the near future, university physicians, provincial officials, and members of the regime’s Health Ministry and COVID-19 Task Force continue to express alarm over the rising death toll.

Assessment of hospitals’ experts puts the real number of fatalities in #Iran at 12 to 14 percent of those infected. This is while official statistics put that number around 5%, which is much lower than other parts of the world.https://t.co/eH8enPHT8d#MEK #COVID19 @USAdarFarsi pic.twitter.com/HPGVXOVpta

On Sunday, the governor of Tehran Province warned against making false claims that the virus is under control. “We must not give hollow hope to the people regarding this illness and refrain from normalizing the status quo… We have around 1,400 people hospitalized and more than 600 of them are in ICU,” he said, according to the state-run IRNA.

In Lorestan Province, infections are spreading at an alarming rate. On Sunday, the head of Lorestan’s Civil Defense acknowledged the situation, in remarks carried by the Mehr news agency. “From a contagion standpoint, Lorestan has reached a critical state. In the National Coronavirus Task Force, Lorestan was mentioned as a province with a high spread of the virus. Unfortunately, this trend continues to grow,” he said.

In Sanandaj, Kurdistan, the head of Towhid Hospital reported severe overcrowding. “The capacity of the heart surgery department, which has been allocated to treating coronavirus patients, has been completely filled. In the past two weeks, due to an influx of coronavirus patients, we have hospitalized coronavirus patients in seven other departments that were providing services to other patients. We have problems treating patients with other chronic diseases,” he said, according to the Revolutionary Guards-affiliated Fars news agency.

On Sunday, IRNA carried troubling remarks by the governor of Kermanshah Province. He said: “Statistics show that in Kermanshah province we are witnessing an increasing trend in the number of people being hospitalized, new COVID-19 cases and deaths.”

The mullahs’ inhuman regime is responsible for the new wave of the outbreak and the growing number of victims in #Iran. They do not think of anything but further plunder and preservation of their disgraceful rule #COVID19 pic.twitter.com/4Qw2zau4KY

Several officials have described a “new peak” of infections in various provinces, which suggests that the virus is spreading quickly. The situation in Sistan and Baluchestan Province is rapidly deteriorating, according to the Deputy Dean of Iranshahr Medical Sciences University, who said, “Five counties of Iranshahr, Chabahar, Bampour, Sarbaz, and Konarak, which are in the jurisdiction of this university, are in a red state. After Khuzestan, Sistan and Baluchestan is the province with the most cities in a critical situation,” according to the state-run Tasnim news agency.

The Dean of Zahedan Medical Sciences University said that there is “a new peak” in infections in Sistan and Baluchestan, according to the state-run ISNA.

The governor of Neyshabur, Razavi Khorasan Province also described a new peak of infections in remarks published by the state-run Aftab-e-Yazd daily. “The number of coronavirus casualties has been increasing from May 21 to May 30 and we have entered a new peak,” he said.

On Monday, the Dean of West Azerbaijan Medical Sciences University warned that a second peak may reach West Azerbaijan Province soon.  “In the past five or six days, the number of COVID-19 cases in our province has increased significantly. This has sounded an alarm bell regarding a new spread of this virus among the locals… We may witness a second peak in this province soon,” he said, according to the Revolutionary Guards-linked Javan daily.

More to read about COVID-19 outbreak in Iran:

Those who read this article were also interested in: