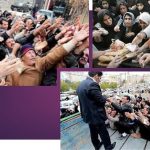 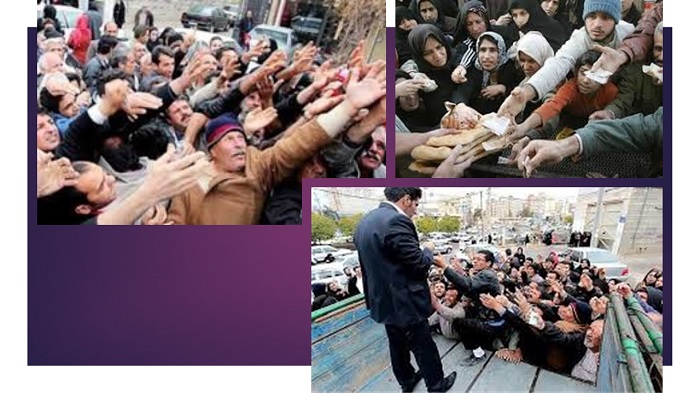 Situationit is very dangerous In Iran for some people to have nothing to lose.

Ahmad Tavakoli, a former adviser to Rouhani and a member of the Expediency Council, said in a recent interview that out of 403 million deposit accounts in the country, only 0.4% of account holders have 52% of total deposits and 99.6% of account holders, hold 48% of the amount.” (Economics Chapter) Ahmad Tavakoli, while pointing to this huge class divide, says that if we cannot provide effective solutions to this problem, we will have more problems.

The extinction of the middle classes

The warmongering policies of the Iranian regime in the region and the formation of paramilitary forces on the one hand and the institutionalized looting and corruption on the other hand have caused the middle classes of Iran to be pushed to a lower level, especially after Ahmadinejad’s presidency. The people of these classes are very dissatisfied with the current situation and want to return to status-quo. In Iran, a new class has emerged from the middle classes, all of whom are strongly protesting and no longer have anything to lose. This class is described as dangerous because it seeks to completely disrupt the existing order.

The economic situation in #Iran is also declining, as it has been for the past four decades. Since the mullahs’ regime took power in 1979, Iranian rial has lost a massive 600 percent of its value against the US dollarhttps://t.co/H39npFsvz9#MEK #COVIDー19 @USAdarFarsi #economy pic.twitter.com/LHodO8hQtA

Iranian officials say that after the COVID-19 virus crisis, there will be four million people (in this class) and we will reach a situation that some of these people will be classified as poor unemployed. According to the authorities, it is very dangerous for some people to have nothing to lose.

An analyst on the mid-November 2019 uprising in Iran says that more than 100 ambulances were set on fire during the uprising. According to him, the burning of ambulances is completely different from the burning of a police car or a trash can. This means that rebellious people do not consider any element of this situation to be their own. Abbas Akhundi, the former minister of Rouhani’s cabinet, believes that this (burning ambulances) means overcoming all common norms among all classes of society. Abbas Akhundi adds, “Our society is paying more than anything else for the unprecedented decline of justice indicators. The society is waiting for the occurrence of negative and unprecedented events at any moment.” (Iran Newspaper, April 18, 2020)

Another riot is on its way

A website close to the government, Eghtesad Saramad (leading economy), feels threatened, and warns the Iranian regime of the upcoming insurgency: “Those who think that without strong economy, relying just on military power, in the long run they can provide security for the country, must remember that the Soviet Union did not collapse with a foreign military attack. It was the attack of their own dysfunctional economy that without a single shot being fired brought them down. Because no country has ever been able to build a military capable of fighting the army of poverty and misery.” (Eghtesad Saramad, December 31, 2019). In such a context, the phenomenon of “COVID-19” has also emerged.

More than 41,000 people have died of the novel #coronavirus in 317 cities checkered across all of #Iran's 31 provinces, according to the Iranian opposition PMOI/MEK. pic.twitter.com/YUSMXaSNRB

The COVID-19 Crisis, in addition to its devastating impact on public health, has far-reaching social and economic consequences that could be far more dangerous to the Iranian regime. These consequences will first appear in the field of economics, then they will soon give way to social explosions. This is while we have gone through the uprising of mid-November 2019 and the uprising of January 2020.

“Unfortunately, the current situation is so difficult that social and security problems (street explosions) can occur not only in the post-Corona period but also in these same circumstances,” said Morteza Moballegh, a former political and security deputy at the Interior Ministry. (Arman newspaper, April 12, 2020) Crisis conditions prevail in the country and the regime seeks to manage these conditions.

Is quarantine the way to salvation?

Some analysts close to the regime believe that the most logical and sensible way for the country not to fall is to create a kind of convergence between the two perspectives of protecting people’s lives and the view of providing people’s bread. (Newspaper close to the government, Jahan Sanat, April 11, 2020) It means that quarantine must be maintained at all costs.

But Iran’s Supreme Leader has already shown that he does not want to spend hundreds of billions of dollars under his control for the poor and the affected. He wants everything to survive. So on April 11, he repealed the quarantine rules and regulations and sent all the workers and laborers to the Coronavirus slaughterhouse.

In this way, however, the Supreme Leader himself has drawn another revolt that is hard to imagine he can survive it.