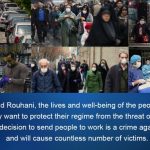 Written by Mohsen Aboutalebi on April 21, 2020. Posted in NEWS 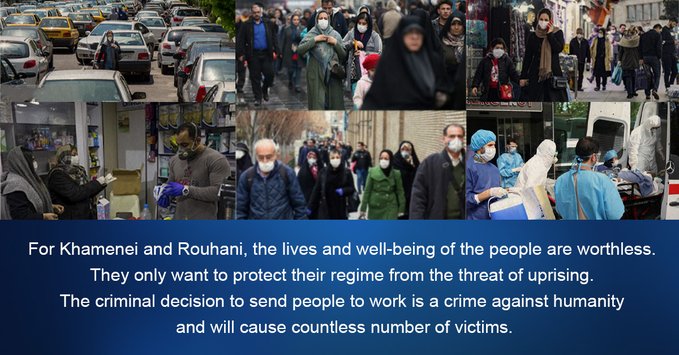 The death toll rises and the Iranian regime’s leaders do not care.

Mujahedin- Khalq (PMOI/MEK Iran) sources reported that more than 32,800 people have died of Coronavirus in Iran and the number continues to rise dramatically. More than 5,500 of these deaths were in the Tehran area and almost 3,000 in Qom.

The Iranian regime has mismanaged the health crisis from the very beginning. It initially denied that cases of Coronavirus had been detected in the country, and when it was no longer able to continue with the denials, it proceeded to under-report the death toll.

The Iranian President and the country’s Supreme Leader have tried to portray an image of control, saying that the country is dealing with the crisis very well and that there are no problems with overrun hospitals. However, the people on the front line, including doctors, nurses and medical workers in every single province, are painting a different picture.

While President Hassan Rouhani is saying that intensive care units still have plenty of available beds, doctors and nurses in these hospitals are saying that they are working beyond capacity.

Furthermore, the regime’s negligence and mismanagement have led to medical workers being underequipped. At the beginning of the crisis, the regime was selling protective equipment to other countries for a profit and was stockpiling supplies for its own Islamic Revolutionary Guard Corps (IRGC). This has led to numerous medical workers across the country contracting COVID-19 while they care for the sick, putting their own families at risk.

It is also very clear that the regime is more concerned about the economic consequences of the health crisis. Low and medium risk workers have returned to their normal working activities despite advice from scientific and medical experts who warned that this will result in a surge of infections within two weeks.

The people of Iran have been left very vulnerable because of the regime’s corruption, negligence, and mismanagement of the situation. People have been left in a position where they either contract Coronavirus and become gravely ill, or die of starvation. The population of Iran is overwhelmingly poor and these people are being left to fend for themselves with very little help from the government.

Any action that the regime has taken has come far too late. Even now, it continues to maintain that the death toll is only a fraction of the 32,800 reported by the opposition.

Over 32,800 people have died of the novel #coronavirus in 294 cities checkered across all of #Iran’s 31 provinces, according to reports tallied by the Iranian opposition PMOI/MEK as of Monday afternoon local time, April 20.https://t.co/S50pV5z5Gq

Prisoners in Iran are particularly vulnerable because the conditions they are held in are appalling. The prisons in Iran are extremely crowded and the sanitary and hygiene conditions are far below international standards. Families of prisoners are very concerned about the well-being of their loved ones and reports indicate that there have been several riots in prisons across the country.

Governments across the world are acting in the interests of the people. Economic concerns are obviously at the forefront, but governments are ensuring that their people are living in the best of conditions and that health services can cope with the health crisis. The Iranian regime’s failures in this regard are criminal and the regime must be held accountable.