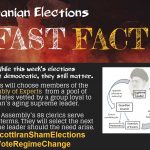 Written by Esmail Mohades on February 21, 2020. Posted in MEK (PMOI) IN MEDIA 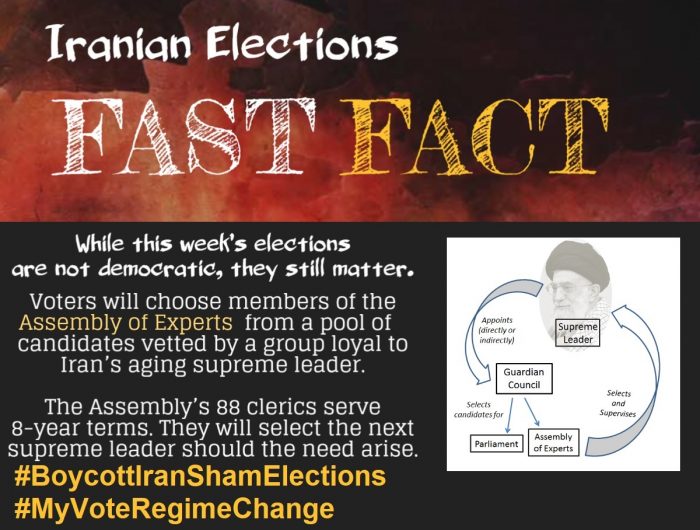 On Thursday, Townhall.com published an article by former Italian Foreign Minister Giulio Terzi analyzing the Majlis (parliamentary) elections on Friday and the anticipated effects of a nationwide election boycott on the regime’s legitimacy.

Terzi explained that Iran is ruled by a Supreme Leader who is not directly elected by the people. The Supreme Leader (currently Ali Khamenei) is always a religious cleric and “represents the essence of the regime’s undemocratic nature,” according to Terzi.

The 12-member Guardian Council, which answers your Khamenei, supervises all elections. Khamenei appoints six clerics to serve on the Council, while his appointed Judiciary Chief nominates six lawyers to Majlis for confirmation to the other slots.

Terzi wrote that the Guardian Council disqualified more than half of the candidates for the upcoming Majlis elections, including 90 current members. The overwhelming majority of the disqualified candidates were from regime President Hassan Rouhani’s faction.

“This purge demonstrates Khamenei’s push to completely control all political instruments needed to implement his dark agenda. He needs to do this because he fears that the waves of popular protests are growing and becoming more organized,” Terzi stressed.

The November Uprising in 2919 brought millions of Iranians in almost 200 cities into the streets to protest the regime. More than 1,500 protesters were killed by regime security forces after Khamenei ordered the Revolutionary Guards (IRGC) to suppress the uprising. Another 12,000 were arrested.

Khamenei placed the blame for the uprising on the MEK, stated Terzi. The MEK has now called for a mass boycott of the national elections, saying that the people voted when they called for regime change in November. Such a boycott would “further expose the unprecedented rift between the people and the regime,” wrote Terzi.

Regime officials have responded to calls for a boycott of the election with increasing alarm and have made a number of public statements urging people to vote. Despite their pleas, a recent poll showed that 82 percent of the population planned to stay home on Election Day, wrote Terzi.

He argued that support for the boycott reflects support for the MEK and National Council of Resistance of Iran (NCRI) President-elect Maryam Rajavi, both of whom have called for the Iranian people to skip the elections.

“Mrs. Rajavi called it a ‘patriotic duty’  to boycott the sham elections. Participation in such a farce serves only to provide an underserved veil of legitimacy for Iran’s tyrants,” wrote Terzi. “Boycotting it would also demonstrate a national bond with Iranian martyrs, especially the 1,500 martyrs of the November uprising,” he added, referencing Mrs. Rajavi.

The boycott of the sham elections is a patriotic duty and the bond of the Iranian people with their martyrs, especially the over 1,500 martyrs of the November uprising. #Iran #FreeIran2020 #BoycottIranShamElections pic.twitter.com/RKWXwHbOe8

“The Iranian people deserve a truly democratic republic that respects what is rightfully theirs: democracy and basic human rights,” Terzi emphasized.

The former Foreign Minister stressed that European governments should stand with the Iranian people in their boycott of this sham election.

“That parody democracy is a nightmare for the Iranian people and their quest for freedom. The European Union, its institutions and all its member states must recognize this fact immediately, and must take action by insisting upon international monitoring of the process and establishing an appropriate set of additional binding sanctions against the officials and institutions that are responsible for withholding true democracy in Iran,” he concluded.