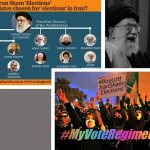 Written by Mohsen Aboutalebi on February 20, 2020. Posted in NEWS

Regime leaders are responding to the nationwide call for a boycott of Friday’s Majlis (parliamentary) elections with commands, pleas, and attempts to rig the vote as a crucial test of the regime’s legitimacy looms near.

The problem with Khamenei’s reasoning is that the Iranian people do not like the system and do not want to safeguard its legitimacy. His argument fails in that it does not address the reason for the boycott.

The Mujahedin-e Khalq (PMOI/MEK Iran) has repeatedly stressed that the Iranian regime is incapable of reform because it refuses to change its behavior. Even when faced with clear evidence of popular dissatisfaction, Khamenei refuses to acknowledge or address it.

Regime President Hassan Rouhani, who has publicly complained about the disqualification of his faction from the elections, also begged for voter participation this week, saying, “Everyone must participate in the election.  No one should say because their friends or fellow party members were disqualified, they will not participate… If we want to stand up to America, we must vote… Our presence will disappoint America and our absence will make America happy.”

Rouhani is mistaken if he believes that the U.S. is deeply concerned about the outcome of the Majlis elections. He is also mistaken in his belief that the Iranian people care more about disappointing the U.S. than making their voices heard in Iran by refusing to legitimize an oppressive regime that steals their wealth.

Rouhani’s political advisor Hesameddin Ashena addressed supporters of his “moderate” faction and encouraged them not to boycott the election because of the Guardian Council’s decision to disqualify candidates from his faction. He used dubious and threatening reasoning, writing, “Snubbing the ballot box is not snubbing the government or the Guardian Council. It leads to an increase in sanctions, in the probability of a military assault, and in MEK’s sabotage operations.”

The majority of the population are predicted to participate in the boycott on Friday. Regime factions have estimated that 85 percent of Iranians may stay home on Election Day.

#Iran parliamentary elections will be held on Friday but given that regime is facing a multitude of domestic and international crises, the real focus is on trying to prevent the fall of the regimehttps://t.co/GXNHt86yfJ#BoycottIranShamElections #MEK @USAdarFarsi #FreeIran2020 pic.twitter.com/01DgVw1S2X

Guardian Council spokesman Abbas Ali Kadkhoda’i was more optimistic, predicting a 50 percent turnout, while Mostafa Mirsalim, a leader of Khamenei’s faction, claimed that 70 percent of Iranians would show up at the polls. It is worth noting the Guardian Council, which is appointed by Khamenei, disqualified rival factions from the elections, making the vote essentially a selection of candidates from a single faction.

Calls for a boycott of the elections have been plastered on walls in cities across Iran, and youth have set fire to election posters and destroyed candidates’ election offices in protest. The exact scale of the boycott will be seen on Election Day, but 70 percent of the population would only be achieved by cheating, and even that would be a significant boycott.

Faced with an inevitable boycott, the regime has resorted to fraud. Rouhani alluded to cheating in a January 27th speech, saying: “In the end, when they want to compile the votes, there will be a mess. Many elections run into a problem when the vote has complied.”

State television reported that the regime buys votes, engineers ballots, and buses people to polling stations to manipulate the vote.

Iranian dissidents who don’t support the hard-line regime in #Iran telling their fellow citizens not to cast their votes in the elections coming up next weekhttps://t.co/iML5in2TuE#BoycottIranShamElections #FreeIran2020 #MEK @USAdarFarsi pic.twitter.com/NWbBWxzQhc

In addition to election fraud and vote-rigging, Khamenei is sending the Revolutionary Guards (IRGC) and Basij Force to oversee polling stations. The suppressive forces who killed 1,500 protesters during the November Uprisings will be tasked with standing over people while they select candidates according to a religious edict.