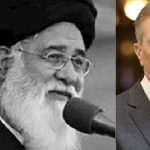 Mullahs’ Mouthpiece Calls for U.K. Ambassador to Be Cut into Pieces, Protesters to be Executed

Written by Mohsen Aboutalebi on January 16, 2020. Posted in NEWS

Mullah Alamolhoda the representative of Ali Khamenei, the regime’s Supreme Leader, in Mashhad and Rob Macaire the UK Ambassador to Iran

On Tuesday, January 14th, Ahmad Alamolhoda, the Friday prayers and representative of Ali Khamenei, the regime’s Supreme Leader,  in Mashhad, Khorasan Razavi Province, further inflamed tensions between the Iranian regime and the international community by threatening to chop the U.K. ambassador to Iran into pieces. Alamolhoda, who as a Friday prayers leader is considered a mouthpiece of regime Supreme Leader Ali Khamenei, also called for the execution of protesters.

The British ambassador to Iran was arrested last week a half-hour after leaving a vigil for victims of the crash of a Ukrainian airliner that was shot down by the Revolutionary Guards on January 8th in Tehran. The ambassador, Rob Macaire, attended the vigil to honor the victims, four of whom had ties to the U.K. but left after attendees began chanting anti-regime slogans.

Macaire was arrested for participating in the protests in flagrant violation of international law, which prohibits the arrest of diplomats in their host countries and detained for more than an hour before being released.

Alamolhoda also threatened protesters who have taken to the streets to express their outrage over the regime’s downing of the Ukrainian airliner, killing all 176 passengers, referring to them as the “enemy’s fifth column.”

The downing of the Ukrainian plane has led to a slew of anti-regime protests in cities and universities across Iran. MEK Iran Resistance Units have helped to organize and lead the Iranian people as they focus their outrage on the ruling theocracy.

Alamolhoda also threatened protesters who tore down posters of IRGC Quds Force Commander Qassem Soleimani, who was killed in a recent U.S. drone strike. “A bunch of spies and paid agents took to the streets for 3 [consecutive] days and tore down Soleimani’s pictures, and we are supposed to stay silent? The Judiciary officials should note that we are at the state of war. We launched 13 missiles against American targets, and we are at war with this country. When a country is at a state of war, those who cooperate with the enemy are identified as the fifth column and should be court-martialed and executed.”

“The latest #IranProtests fit into a much larger pattern.Public demonstrations in the Islamic Republic seldom remain focused on the specific issues that spark them precisely bcz #Iranians understand that the root of their problems is the regime that governs them,”@ProfSheehan pic.twitter.com/LIuOu5t8sR

MEK Iran Resistance Units played a key role in tearing down posters of Soleimani. The regime has made repeated claims that the MEK Iran is not an active group inside Iran and has no support, but the increasing number of anti-regime protests all bear the mark of the MEK’s planning and organization, and regime officials are quick to blame the MEK Iran when protests flare.

Alamolhoda further inflated the number of attendees at Soleimani’s funeral, saying, “In a city [Mashhad] where 7 million people mourned Soleimani, weren’t there ten thousand people to stop [protesters] from tearing down his picture?”

While this is an excellent point, and he would do well to reflect on why no one prevented protesters from tearing down Soleimani’s posters if he was so beloved in Iran, it doesn’t do much to prove that Soleimani was a national hero. In addition, the population of the Mashhad metro area is 3.6 million. He either doesn’t know the population of his own city, or he doesn’t care about the truth. In either case, there were not 7 million mourners in Mashhad.