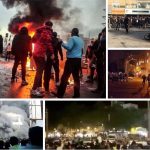 Written by Esmail Mohades on November 27, 2019. Posted in MEK (PMOI) IN MEDIA

scenes of the November 2019 uprising across Iran

In a November 24, 2019 op-ed in the Dallas Morning News, Homeira Hesami of the Iranian-American Community of North Texas argued that the international community lacks a complete picture of the Iranian regime’s response to the nationwide protests that are raging throughout the country. Because Internet access in Iran is still limited to government officials and state-run media, the world has only had a glimpse of the crime against humanity that is currently taking place.

Similarities to the 1988 Massacre

Hesami wrote that the current situation in Iran is reminiscent of the regime’s crimes during the 1988 Massacre, during which 30,000 political prisoners (mostly Mujahedin-e Khalq (PMOI/MEK) members) were executed over the course of a single summer and buried in mass graves. As in the 1988 Massacre, many of the victims’ bodies have not been returned to their families. It is likely that the perpetrators of this current crime will, like their predecessors in 1988, not face justice for their actions. In fact, some of those responsible for the 1988 Massacre are in positions of power in the current regime.

On the Brink of Overthrow

Hesami wrote that the current uprising reflects a desire for change that has been simmering for four decades. “The current unrest is indicative of a deep desire for change that has been simmering for the better part of 40 years, expressed in a long series of protests that led inexorably to today’s uprising. The swiftly imposed Internet blackout serves to isolate Iran from the world, so the regime can better hide its vulnerability. But from what has been seen so far, it may no longer be possible to conceal the fact that the Iranian people are on the brink of overthrowing their authoritarian government,” she wrote.

The nationwide uprising in #Iran reached its Twelve consecutive day on Monday, November 25th as people checkered throughout the country continue to protest the corrupt and brutal regime.#IranProtests #MEK #FreeIran @USAdarFarsi pic.twitter.com/Igi4EhySJ4

“The growing death toll essentially proves the truth of this assertion. This round of protests appears poised to continue in spite of many more deaths, injuries, and threats of harsh punishment by the Iranian judiciary, now in the hands of one of the leading perpetrators of the 1988 massacre, Ebrahim Raisi,” Hesami continued.

“As in the 2018 uprisings, Tehran begrudgingly attributed credit for guiding the protesters to the Iranian Resistance led by Maryam Rajavi and the People’s Mojahedin Organization of Iran (PMOI/MEK). The resistance’s leading role in organizing the current protests is a testament to the organizational and strategic prowess of the MEK and the fact that the clerical regime has utterly failed to destroy this movement,” she added.

Will the World Support the Protesters?

Hesami noted that the regime’s decades of repression have failed to silence its people, so the current crackdown is doomed to failure as well. The real question is whether the international community will choose to support the people of Iran or if they will continue to turn a blind eye to the regime’s crimes against its own people.

The #MEK supporters held a march in Washington DC in support of the Iranian protests for a free #Iran in front of the White House.#IranProtests #FreeIran @USAdarFarsi pic.twitter.com/5G4MCvkU4a

“To their credit, the White House, the State Department, and the U.N. Human Rights Council have each issued statements affirming the Iranian people’s right of dissent and condemning the excessive use of force by Iranian authorities. But such statements are only half-measures and must be followed by concrete measures to cut into the regime’s sense of impunity,” she wrote.

Hesami added that more decisive action is needed if these leaders are truly concerned about Iranian activists and their democratic goals.

The Iranian people are currently rising up against the mullahs with the goal of overthrowing the entire corrupt regime. They need the support of the international community to succeed in their goals. The world has stood by for four decades while the Iranian regime has engaged in systemic human rights abuses, widespread domestic suppression, and regional warmongering. Supporting the Iranian protesters in their struggle for democracy is the least the international community can do now, concluded Hesami.