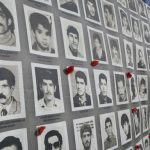 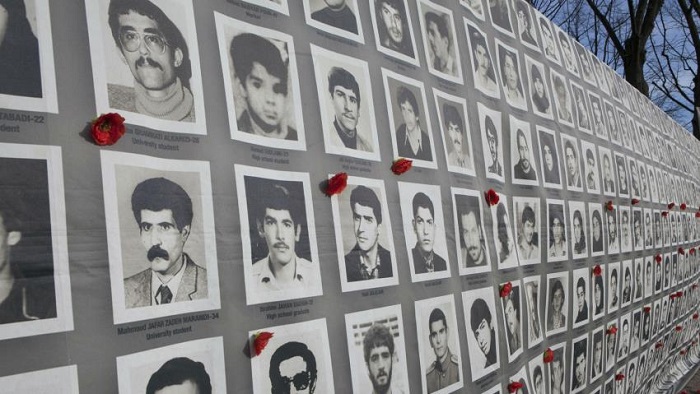 A photo exhibition of some of the 30000 political prisoners (mainly MEK activists), executed in just a few months in Iran by the order of Ruhollah Khomeini, founder of the ruling dictatorship in Iran. Paris, September 2017

This summer marks the 31st anniversary of the 1988 Massacre of 30,000 political prisoners by the Iranian regime. The mass executions, which targeted MEK members and supporters, took place over the course of a single summer on the order of regime founder Ruhollah Khomeini. To date, none of the perpetrators of this crime against humanity have faced justice.

Last December, Amnesty International published a report about the 1988 Massacre and the regime’s attempts to prevent the families of the victims from seeking justice. The report, entitled “Iran’s Blood-Soaked Secrets: Why Iran’s 1988 prison massacres are ongoing crimes against humanity,” contains new details of the regime’s ongoing crimes against those who seek justice for those who were murdered in 1988.

“Between July and September 1988, the Iranian authorities forcibly disappeared and extrajudicially executed thousands of imprisoned political dissidents in secret and dumped their bodies, mostly in unmarked mass graves.”

“Since then, the authorities have treated the killings as state secrets, tormenting the relatives by refusing to tell them how and why their loved ones were killed and where they are buried.”

The regime spent years denying that the massacre took place, but several high-ranking officials have recently made public remarks in defense of the executions due to widespread condemnation from the international community. 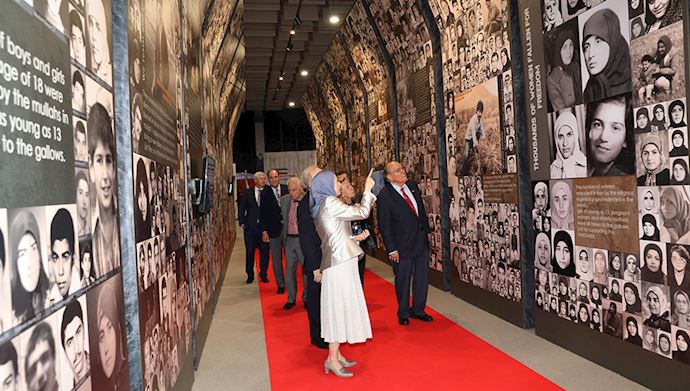 International dignitaries visit the exhibition in Ashraf 3, MEK’s headquarter in Albania, witnessing the evidence, facts, and photos of some of the victims of the 1988 massacre

Awareness of the 1988 Massacre has grown largely due to the MEK’s efforts to seek an independent investigation into the crime. This summer the MEK held several large rallies in world capitals and organized a five-day conference at Ashraf-3, its headquarters in Albania, which was attended by hundreds of prominent politicians and dignitaries from more than 450 countries. Survivors of the massacre shared their testimony, and human rights activists called for the perpetrators to be tried by the International Criminal Court (ICC).

A former political prisoner and human rights activist, said, “I was in prison for many years just for the freedom and now it’s my turn to speak up and be the prisoners’ voice.

“Iran is an old country with a great background on human rights but under the Mullahs they lost everything not only dignity but also their national capitals.”

Human rights activist and author of the anti-regime blog Freedom Star, Mr. Dalvand, said: “For three decades, the international community has been silent over the massacre of political prisoners in Iran.

“As a result, the mullahs have continued with impunity to violate human rights in Iran, launch terrorist operations, and wage catastrophic wars in the Middle East and other countries.

“Now, the time has come to end this silence.”

Those who opposed the regime in the 1980s faced torture, imprisonment, and execution.

Former political prisoner Hossein Fathi and his wife lost 14 members of their family to the regime’s executioners. He told Express: “I witnessed the torture and they tortured me by lashing. They hung me from the roof and tried to kill me.”

Ahmad Ebrahimi was detained in Gohardasht prison during the same era. He said: “They kept us in the dark: we didn’t know what was going on or what was going to happen.

“And we were taken blindfolded where all of us—150 of us—were taken to an interrogation room and asked about our views towards the regime.

“If we did not say we supported the regime, they would kill us straight away.”

All the iranian authorities from the very start to the present time should be brought to justice for the most brutal crimes committed against humanity in 1988 #1988Massacre#MEK pic.twitter.com/kGelSCmLs8

Raha Bahreini, Amnesty International’s leader researcher on Iran, called on the United Nations to “finally hear the cry of families and survivors.” Bahreini added: “We believe this serious human rights situation in Iran is tied to the impunity that the Iranian authorities have been able to enjoy since the 1980s for the crimes against humanity that they have committed.”