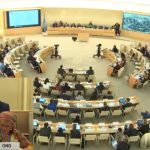 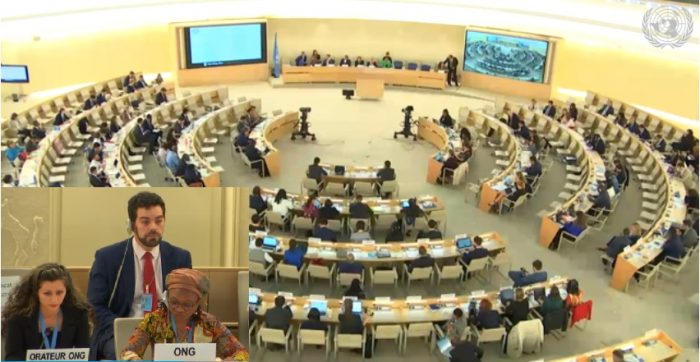 Human rights activists from international non-governmental organizations (NGOs) addressed the United Nations Human Rights Council this week to demand a U.N.  investigation into the 1988 Massacre of 30,000 political prisoners in Iran, most of whom were members or supporters of the Mujahedin-e Khalq(PMOI/MEK)

The NGO representatives expressed their concerns to Bernard Duhaime, Chair of the U.N. Working Group on Enforced or Involuntary Disappearances, and Fabian Salvioli, U.N. Special Rapporteur on the Promotion of Truth, Justice, Reparation, and Guarantees of Non-recurrence, during an “interactive dialogue” at the 42nd session of the U.N. Human Rights Council in Geneva on September 11, 2019.

Appeal to the Human Rights Council

Milica Javdan of the NGO Women’s Human Rights International Association made a passionate argument to members of the Human Rights Council for an investigation into the 1988 Massacre, saying:

“In the summer of 1988, 30,000 political prisoners were massacred by the Islamic Republic of Iran. The mass atrocity was based on a fatwa by Supreme Leader Ayatollah Khomeini. His decree called for the execution of all political prisoners affiliated to the People’s Mojahedin Organization of Iran [MEK] who remained steadfast in their resistance to the Iranian regime. The victims were buried secretly in mass graves. For 31 long years, the Iranian government has tried to conceal the truth about the mass executions from the International Community.

31 years ago, Khomeini's secret fatwa was issued to execute political prisoners in support of #MEK. Executions still continues in #Iran but offender are immune from trial. Let’s put an end to appeasement.#HumanRights #1988Massacre #NoImpunity4Mullahs @UKUN_NewYork pic.twitter.com/ghZbDg3VvU

“To date, the grieving families of the victims have not received any information about the fate of their loved ones. There is no paper trail on the prisoners’ whereabouts, no trial documents and no graves to visit. The victim’s families look to you for answers.

“In August 2017, your colleague, the late Special Rapporteur on the Situation of Human Rights in Iran, Asma Jahangir, informed the General Assembly about the 1988 Massacre and requested an investigation to discover the truth about the bloody summer of 1988.

“Mr. Salvioli, what measures has your office taken in order to investigate this matter and to seek answers from the Iranian government about the true fate of the victims of the 1988 Massacre? Many of the perpetrators of this heinous crime still hold senior positions in the Iranian judiciary and government, such as Judiciary Chief Ebrahim Raisi and Justice Minister Alireza Avaei. On the 25th of July 2019, in an official interview, Mostafa PourMohammadi defended the 1988 massacre and said newly caught Mojahedin activists would face capital punishment. Impunity breeds reoccurrence!

“We appeal to you Mr. Salvioli, to investigate the 1988 massacre as part of your mandate.

In the summer of 1988, regime founder Ruhollah Khomeini issued a fatwa ordering the executions of all MEK members imprisoned inside Iran. He formed three-member “Death Committees” to conduct trials in the regime’s prisons that lasted only minutes. Those who refused to renounce the MEK were sentenced to death, executed in groups, and buried in mass graves.

Many of those who were executed had already completed their sentences and were waiting to be released. The victims included teenagers, pregnant women, and the elderly.

To date, none of the perpetrators of this crime against humanity have been brought to justice. Some of those responsible have gone on to serve as high-ranking members of the regime. Former Death Committee member Alireza Avaei is now Hassan Rouhani’s Justice Minister. Former Death Committee member Ebrahim Raisi was appointed as the regime’s Judiciary Chief earlier this year.