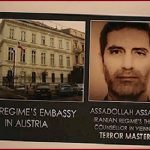 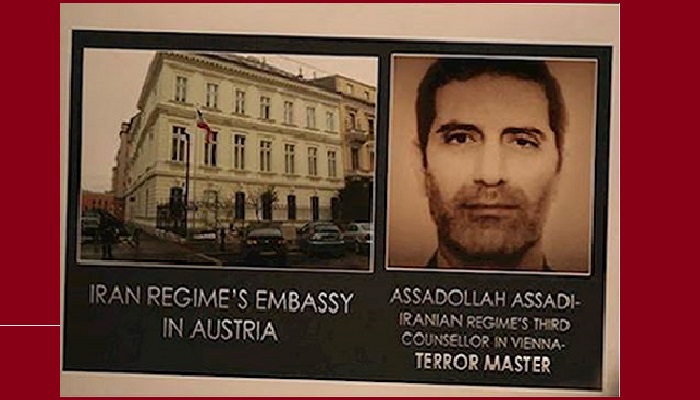 The Iranian regime diplomat-terrorist, who was the mastermind behind last year’s terror plot to bomb MEK’s Free Iran rally in Paris. Assadollah Assadi was arrested by German police and later extradited to Belgium for trial.

In an op-ed published on the Euractiv website, former Italian Foreign Minister Giulio Terzi argued that U.S. Secretary of State Mike Pompeo’s trip to Brussels on September 2-3 offers an excellent opportunity to address the global threat posed by the Iranian regime.

#Pompeo’s visit to Brussels is an opportunity for a unified Iran strategy @EURACTIV https://t.co/hm3OnW1456 @GlobalCRL

“One of the main challenges is how to deal with the Iranian regime and its bellicose behavior,” wrote Terzi. He cited the regime’s increasing aggression toward commercial shipping vessels in the Middle East, including the seizure of a British-flagged vessel in mid-July.

“The United Kingdom responded appropriately by directing its warships in the region to shadow such vessels for the foreseeable future. But Europe has seemed hesitant to recognize the Iranian threat as extending to them,” Terzi wrote.

“The EU may be able to fool itself into believing that the naval activities of the Islamic Revolutionary Guard Corps have been directed only against the US and Britain, even though seized and damaged tankers have born the flags of various countries including Norway and Japan. But no such self-deception can be justified when it comes to the threat of terrorism originating in or backed by Tehran,” he stressed.

Now is the time for EU to speak out and address the regime’s terrorism and cyber attacks in Europe@FedericaMog has not spoken out as voice of Europe against #Iran’s terrorism in Europe in elsewhere.#ExpelIranDiplomatTerrorists @GermanyDiplo @focusonline@eu_eeas pic.twitter.com/dX2T5Pdmbe

The former Italian Foreign Minister explained that at least six terrorist plots and assassinations by the Iranian regime were foiled by Western authorities in 2018. The targets ranged from opposition groups in the United States to the MEK’s headquarters in Albania.

The most significant of the regime’s 2018 terrorist plots involved an Iranian-Belgian couple who were arrested with 500 kilograms of TATP explosives. The couple acting under the orders of regime diplomat Assadollah Assadi, were enroute to the annual Free Iran gathering of the National Council of Resistance of Iran (NCRI) in Villepinte, France where they planned to set off the explosives.

The Free Iran gathering was attended by 100,000 Mujahedin-e Khalq (MEK) supporters, as well as hundreds of high-ranking politicians and dignitaries from around the world. Terzi was in attendance.

Regime diplomat Assadollah Assadi was arrested for masterminding the attack and eventually extradited to Belgium, where he and three accomplices are currently awaiting trial. The plot was planned by officials at the highest levels of the regime, wrote Terzi.

“Had the plot been successful, it would have not only taken place on European soil but would have almost certainly claimed European lives. If one is aware of this incident, one cannot deny that the Iranian threat to the international community is genuine, severe, and far-reaching,” Terzi emphasized.

“To be more precise, no one can deny this conclusion in good faith. But that won’t necessarily stop any given policymaker from denying it anyway. In advance of Iran’s Foreign Minister visiting Paris, French President Emmanuel Macron reportedly told his security chiefs to keep silent about last year’s terror plot. Now, in the wake of visits to Europe by the top diplomats from both Iran and the US, it is up to the incoming EU leadership to determine whose attitude toward Iran carries more weight: those who are explicitly covering up its crimes, or those who aspire to hold it to account,” he continued.

“The answer to this question will yield both short and long-term consequences. In the first place, it may determine whether the diplomat-terrorist who masterminded last year’s Paris bomb plot is actually punished in accordance with the charges he is now facing in Belgium. And the message of his prosecution may, in turn, set the stage for a proper, multilateral response to further Iranian terrorism, at a time when the regime is threatening Western entities like the Foundation for Defense of Democracies, subjecting them to ‘sanctions’ that might better be understood as fatwas,” Terzi argued.

Continuing attempts by the regime in Iran to intimidate @FDD, an American think tank—a THINK TANK—must be condemned by all freedom-loving people around the world. The U.S. does not take these threats lightly, and will hold the regime and its “apparatuses” to account.

“Speaking more broadly, decisions in the coming days may determine the future of US-EU relations. The Europeans need to recognize the need for confronting Iranian threats and guaranteeing that the regime faces consequences for criminal behavior,” Terzi concluded.