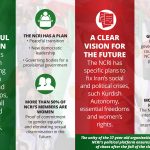 The End of the Mullahs’ Regime Is Imminent

The Iranian regime is in chaos due to an escalating economic crisis, rising social unrest, and growing international isolation. Forty years of failed policies have brought the mullahs to the inevitable end of their rule.

A recent editorial published on ncr-iran.org cited three factors that will lead to the imminent demise of the Iranian regime.

The first factor cited was the growing unrest in Iran, which regime First Vice-President has described as a gas house ready to explode with a single ignition. The clerical regime’s continued repression of human rights and basic freedoms has led to widespread protests and rebellion.

.@Maryam_Rajavi to the Grand Gathering in Paris, July 9, 2016
Owing to explosive public discontent,the regime is continuously gripped by fundamental instability. Additionally,it has come face-to-face with a capable and vigilant alternative force.#IStandWithMaryamRajavi #FreeIran pic.twitter.com/o6KTUeox2s

The Presence of a Democratic Alternative

The second factor responsible for the regime’s terminal crisis is the People’s Mojahedin Organization of Iran (MEK / PMOI). The NCRI with the MEK as its backbone has risen as a viable democratic alternative to the clerical regime over the past forty years, gaining popular support within Iran. The regime’s numerous attempts to destroy the MEK through mass executions, underhanded diplomatic dealings, propaganda attacks, and terrorist plots have all failed.

Process and promise of change has many integral components: capacity to hope for better, people’s desire for change, leadership, organization to dismantle existing system, and the political alternative to secure the change and future. Iranian Resistance has them all and beyond. pic.twitter.com/NMgTJPV7mv

The most recent foiled terrorist attacks on the MEK led to severe diplomatic consequences for the regime and its agents. The regime’s demonization campaign against the MEK has failed, and the opposition stands ready to bring democracy to Iran.

An End of the Era of Appeasement

The final unsolvable issue for the regime is the end of the era of appeasement. The mullahs have survived for the past forty years because Western governments turned a blind eye to their human rights abuses, nuclear and missile programs, and regional aggression. The current United States administration has taken the right approach in dealing with the Iranian regime. Last year, the U.S. reimposed oil sanctions on the Iranian regime. Earlier this year, it ended waivers to countries still receiving oil imports from the regime, with the goal of bringing the Iranian regime’s oil imports to zero. The U.S. also designated the Islamic Revolutionary Guards Corps (IRGC) as a terrorist organization.

The mullahs must now decide between two courses of action, both of which will lead to the end of the regime.

The regime could meet the demands of the U.S and end its nuclear and missile programs, as well as its regional warmongering and terrorism. This is functionally impossible because the regime has shown itself to be incapable of reform. Khamenei has repeatedly said that a change in behavior is tantamount to a change in regime.

The regime could further isolate itself and refuse to make changes. This would lead to war or internal collapse due to economic failure or social rebellion.

Both courses of actions would lead to the end of the regime, so the mullahs have chosen a third path: they are stalling for time.

At home, the mullahs are appointing repressive officials and cracking down on dissent to prepare for an inevitable rebellion. It seems clear that the mullahs know that the end is near.