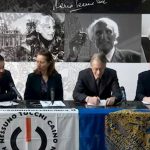 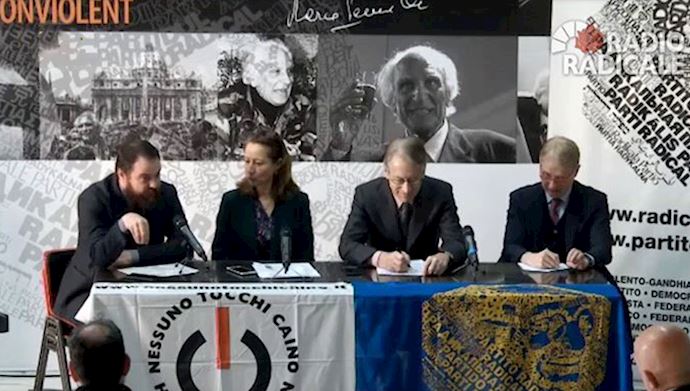 Conference at the Headquarter of Italy’s Radical Party, introducing a report by the former Deputy Finance Minister of Italy, Mario Baldasaro entitled “What if Iran spent its terror group budget on domestic issues?”

A conference held at the Italian Radical Party evaluates the threat of the mullahs' regime ruling #Iran on the Middle East region & across the globe.https://t.co/BqDd7NJDmn

Former MP Zamparutti opened the conference by reminding attendees of the lengths that the Iranian regime has gone to in its attempts to eliminate the MEK and continue its rule. She noted that the regime’s ambassador and one of its diplomats were expelled from Albania because of their roles in an attempted terrorist attack on the MEK headquarters in Tirana (Asraf 3). She added that Iran executes more of its citizens per capita than any other country in the world.

Baldasaro presented his report on the Iranian regime’s financial support of terrorist groups, which found that the mullahs budget at least $1 billion per year to its proxies in Iraq, Yemen, Lebanon, and Latin America. Baldasaro stated that over the past four years, this money could have created 2.4 million jobs and reconstructed the country’s infrastructure if it had not been spent on terrorism.

Senator Malan’s speech concerned financial corruption and human rights violations under the regime’s rule. He stressed that the mullahs stay in power through their use of executions, torture, lashing, and crackdowns against religious and ethnic minorities. He emphasized that Western countries should not ignore these acts and should stop doing business with the Iranian regime.

Senator Rampi, who sits on the Italian Senate Human Rights Committee condemned the regime for its oppression of its own people and its aggression toward neighboring countries. He pointed out that the Iranian regime is the number one state sponsor of terrorism in the world and that global stability cannot be achieved without taking a firm stance against the mullahs.

Giulio Terzi cited several studies which describe Iran as a global threat. He condemned the mullahs for plundering the wealth of the Iranian people to maintain its rule and reminded conference attendees of the Iranian regime’s role in propping up Bashar Assad’s regime in Syria. He called for a firm policy toward the mullahs and an end to the policy of appeasement.

Chirachi praised the tough stance by the United States against the Iranian regime and encouraged Europe to take a stand against the mullahs as well. He emphasized that the regime has been forced to its knees politically, socially, and economically, and it is necessary to take a firm approach in confronting its policies.

Behzad Bahrebar thanked Mr. Baldasaro for his research, saying that the report about the economic crisis caused by the mullahs’ corruption and plundering of the people’s wealth paints a sobering picture of the catastrophic effects of the regime’s rule. Bahrebar pointed out that the Iranian Resistance has said for forty years that the regime cannot be reformed.

Hands Off Cain Secretary Sergio Dalia wrapped up the conference with a speech about the regime’s human rights record, which includes more than 3,800 executions during regime Hassan Rouhani’s tenure as President. He also described the 1988 Massacre of 30,000 political prisoners over the course of a single summer, a crime against humanity for which no one has ever been held accountable. Many of the perpetrators of this atrocity have risen to high-ranking offices within the regime, including the current judiciary chief. Dalia concluded that Europe’s policy of appeasement jeopardizes regional and global security.