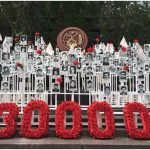 A monument made in memory of 30,000 political prisoners, who were brutally executed in summer of 1988, mainly supporters of the MEK

On Sunday, Tehran’s Revolutionary Court handed down prison sentences to four men affiliated with the MEK. One of these men was condemned to death after the completion of his sentence.

Judge Mohammad Moghiseh, head of Branch 28 of the Revolutionary Court in Tehran, sentenced Abdullah Ghasempour, 34, to death and an eight-year prison term on charges of “waging war on God,” “assembly and collusion,” and “membership in the MEK.” Moghiseh is known for his cruelty in cracking down on any voice of opposition against the regime.

Ghasempour was accused of setting fire to a Basij base, filming his actions, and sending the footage to MEK for media distribution.

Abdullah’s brother, 32-year-old  Mohammad Hossein Ghasempour, 30-year-old Alireza Habibian, and 34-year-old Akbar Dalir were each given five-and-a-half-year prison sentences for “assembly and collusion.” They are currently being held in Ward Four of Tehran’s notorious Evin Prison.

The four men were arrested on May 21, 2018, and transferred to Evin Prison, where they were held for almost a year before standing trial.

The Basij Force is a paramilitary guard that is an affiliate with the Islamic Revolutionary Guards Corps (IRGC), which was recently designated a Foreign Terrorist Organization (FTO) by the United States. The Basiji and the IRGC are responsible for a large number of repressive actions and human rights violations in Iran.

On May 17th, the National Council of Resistance of Iran released the names of eleven activists who had been arrested over the past month for supporting the MEK.

The actual number of arrests is much higher, as these numbers do not account for arrests by the regime’s other repressive organs, such as the IRGC, IRGC intelligence, local law enforcement, and prosecutors.

On April 23rd, the MEK released a list of activists that have been detained for affiliation to the MEK. The following are the names and known information of the detainees: