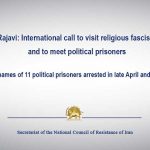 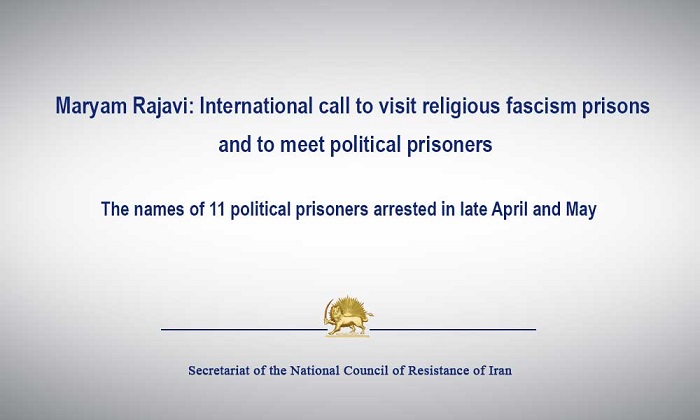 Excerpts from the leader of the Iranian opposition, president-elect Maryam Rajavi asking the human rights organizations to take immediate action to save the lives of the political prisoners, recently arrested during Iran Protests

On Friday, the National Council of Resistance of Iran (NCRI) released a statement concerning the arrests of eleven people for supporting MEK following the regime’s recent crackdown on protests and political dissent within the country.

According to the statement, the crackdown is the most recent desperate attempt by the mullahs to quell the rising outrage in the country due to the dire state of the economy, the regime’s bungled response to the catastrophic floods last month, and the growing influence of MEK Resistance Units, resistance councils, and the nation’s rebellious in organizing protests. These fears have been intensified by the designation of the Islamic Revolutionary Guards Corps (IRGC) as a terrorist organization and the strengthening of U.S. oil sanctions in the past months.

Regime Supreme Leader Ali Khamenei has taken a number of hardline measures to try to prevent the overthrow of the clerical regime. In March, Khamenei appointed notorious Death Committee member Ebrahim Raisi to the position of Judiciary Chief. Raisi was personally responsible for sending thousands of MEK supporters to their executions during the 1988 Massacre of 30,000 political prisoners. Khamenei then appointed Salami, Fadavi, and Naghdi as Commander, Deputy Commander, and Coordinator of the IRGC. All three men are known for their cruelty, according to the NCRI statement.

The regime has now launched a new wave of suppressive measures to prevent the spread of popular uprisings. Hashd al-Shabi forces were transferred from Iraq to flood-stricken areas in Iran, where victims of the disaster are protesting the lack of government aid. Last week, the regime announced the widespread launch of the Razavion, which it has described as “neighborhood-based security patrols.” Security forces have stepped up arrests of political dissidents, particularly MEK supporters.

The NCRI obtained the names of eleven people that have been arrested in late April 2019, for supporting MEK:

On April 23rd, the MEK released a list of 28 people who were arrested prior to that date for the similar charges.

On April 19, 2019, Mullah Alavi, the regime’s Minister of Intelligence, said in a speech that 116 teams associated with the MEK had been arrested over the past Iranian calendar year. On April 24th, the Director General of Intelligence in East Azarbaijan Province followed that statement with his own numbers, reporting 60 arrests and 50 additional encounters with MEK supporters over the past year.

These numbers do not take into account arrests made by the regime’s other suppressive organs, including the IRGC and local law enforcement. Actual arrest numbers are much higher.

Maryam Rajavi, President-elect of the NCRI, once again called on the United Nations Secretary-General, High Commissioner and Human Rights Council, as well as international human rights organizations,  to take urgent action to secure the release of imprisoned people. She also called for the appointment of delegations to visit the regime’s prisons in order to meet with political prisoners. Mrs. Rajavi stresses that political prisoners in Iran are subject to torture and execution.