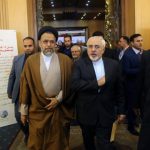 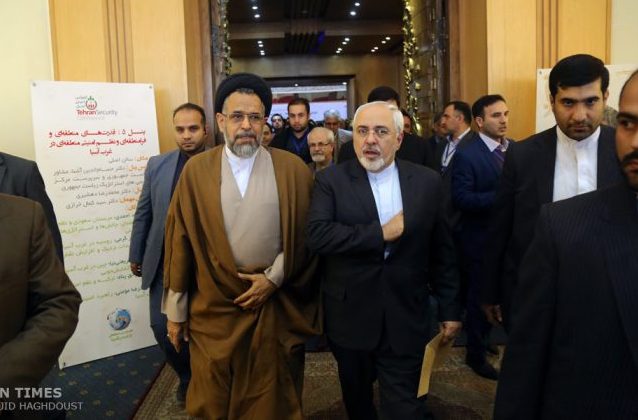 Regime’s Foreign Minister Javad Zarif and regime’s Intelligence Minister Mahmoud Alavi, during a security conference in Iran. A close relationship between the two Ministries both inside and outside Iran

Tsarism, a news and analysis site, published an op-ed on the Iranian intelligence minister’s claim that the regime has arrested and “dealt with” 116 resistance units. The announcement came after the US State Department announced the inclusion of the regime’s Revolutionary Guards (IRGC) on its terror blacklist.

The regime has been rallying around its IRGC in recent weeks, with regime officials turning up to a parliamentary session wearing IRGC uniforms in a gesture of solidarity. It has also attempted to downplay the listing, asserting that the foreign terror organization (FTO) listing would not impact the group.

In an attempt to boost the morale of the IRGC and other repressive units, the Iranian Intelligence Minister Mahmoud Alavi announced during Friday prayers last week that the regime had arrested and “dealt with” 166 resistance units as part of “national security efforts”.

Alavi (#Iran regime's Intelligence Minister)’s choice to focus on the #MEK is in keeping with the regime’s strategy of placing the blame 4the FTO designation or #IRGC on the resistance organization.#IRGCTerrorists #BlackListIRGC #BlackListMOIS @USAdarFarsi https://t.co/YSbBp37rFm

He said: “Over the past year, we have confronted 116 [resistance] units affiliated with the Mujahedin-e Khalq organization [the People’s Mojahedin Organisation of Iran (MEK / PMOI)].” He claimed that this crackdown had come from the regime’s Supreme Leader Khamenei himself.

Following the announcement, the National Council of Resistance of Iran(NCRI), the umbrella organization of the People’s Mojahedin Organisation of Iran (MEK), claimed that Alavi’s estimate was an underrepresentation of the true figure. It asserted that the number of arrests was far higher than those Alavi claimed, suggesting that he may have omitted units and MEK members arrested by the IRGC’s Intelligence and Information Protection branches.

#Iran: The Names of 28 Political Prisoners Arrested in 2018
.@Maryam_Rajavi Call for the appointment of an Int'l delegation to meet with prisoners and visiting prisons of the religious fascism ruling Iran#HumanRights #HRC40 @CFR_org @UN_PGA @ukun_NewYorkpic.twitter.com/f6y3KDxEAE

The President-elect of the Iranian opposition, Maryam Rajavi called on the UN High Commissioner for Human Rights to arrange for an international delegation to visit the arrested activists currently detained in Iranian regime prisons. Alongside her calls, the MEK and NCRI published a list of prisoners currently in regime custody.

The Iranian opposition and the MEK have long called on the international community to scrutinize the Iranian regime’s arbitrary arrests and torture against political dissidents. Following the nationwide uprisings that broke out at the end of 2017 and early days of 2018, 14 prisoners died in regime custody. Many died during torturous interrogations.

More Determined Than Ever

Despite the daily persecution and constant threat of arrest, MEK resistance units are more committed than ever to confronting the regime and challenging its reign of tyranny and violence. On April 18, resistance units set fire to IRGC bases across Iran.

The op-ed assessed that “the resistance units are one of the most important parts of the Iranian people’s revolution, and they are playing their historical role in various methods.”

It concluded: “By organizing and leading the Iranian uprising in an effective manner, resistance units are injecting hope and new life into society.”