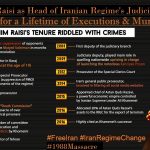 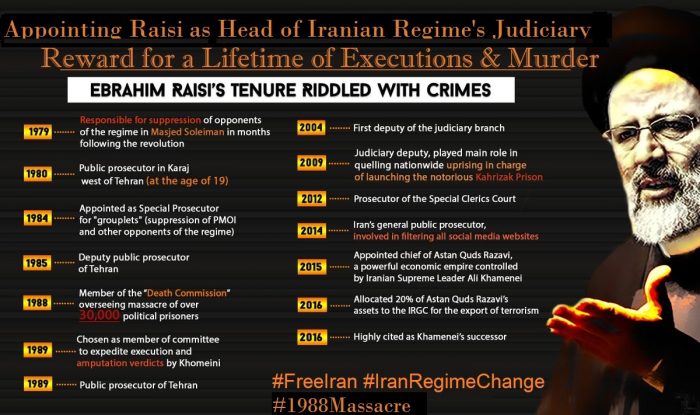 Since Raisi was appointed as regime’s chief Judiciary, there has been a surge in executions and in repressive measures.

“He should be investigated for grave crimes, rather than investigating them.”

At least 44 people have been executed in Iran since Raisi was appointed as Judiciary Chief.

#Iran: @mbachelet stresses that execution of child offenders is absolutely prohibited by international law.
“These 2 cases are particularly outrageous because it appears that both boys were reportedly subjected to ill-treatment & a flawed legal process.”https://t.co/ZT9HXjEbw4 pic.twitter.com/nJwi2E5Bib

A number of prisoners were executed for non-violent drug charges.

One day later, Mohammad Bameri, 24, was executed in the same prison for drug smuggling. Bameri was a university student.

Protests took place in a number of cities across Iran on May 1st and 2nd in recognition of International Labor Day and Teachers’ Day. A number of participants in both protests were arrested, some of whom still remain in custody without access to attorneys.

The Director General of the Intelligence Department in West Azerbaijan Province announced that 110 people associated with MEK Resistance Units have been “dealt with” over the past year.

According to the state-run Fars news agency, 60 people were arrested for communicating with the MEK, while another 50 were given warnings..

This announcement following an earlier statement from regime Minister of Intelligence Mahmoud Alavi, who bragged that “over the past year, 116 teams related to PMOI/MEK have been dealt with.”

In the wake of the devastating floods that swept Iran in March and April, regime authorities threatened anyone publishing news of the floods with a prosecution. 24 journalists were subsequently arrested for reporting on the floods, and four more were arrested for spreading information about the regime’s incompetence in responding to the disaster.

In the absence of government disaster aid, citizens volunteered to provide relief in the aftermath of the flood. Dozens of these volunteers have been arrested by the regime’s Ministry of Intelligence and Islamic Revolutionary Guards Corps (IRGC).

In April, IRGC agents arrested at least eleven Arab-Iranian women who were providing emergency aid to flood victims in the village of Gurieh, Khuzestan Province.

In Malashiyeh, Khuzestan Province, state security forces arrested a group of independent volunteer relief workers and transferred them to an unknown location.

Iran Human Rights Monitor reported a crackdown in the regime’s policy on compulsory veiling of women.

Hundreds of women in Tehran were summoned and given warnings about violating the compulsory veiling policy while driving their cars.

On April 18th, Amnesty International released a statement asking the Iranian regime to end its intimidation of women’s rights activists who protest against mandatory veiling and release those who have been imprisoned for their activism. The statement read, in part:

“The criminalization of women and girls for not wearing the veil is an extreme form of gender-based discrimination and cruel, inhuman and degrading treatment that deeply damages women’s dignity. Instead of persecuting and jailing women who are standing up to this outrageous injustice, Iran’s authorities should immediately and unconditionally release all women’s rights defenders detained for their peaceful activism.”

Ebrahim Raisi, member of the 1988 Massacre’s “Death Commission” assigned as the highest judicial position within the regime.

Ebrahim Raisi was appointed by regime Supreme Leader Ali Khamenei as Chief of the Judiciary in early March. Several days later, he was elected to the Assembly of Experts, the powerful group of mullahs who chooses the regime’s Supreme Leader. Raisi is considered to be a possible successor to Khamenei.

In 1988, Raisi sat on Tehran’s infamous “death committee,” where he personally sentenced thousands of political prisoners, most of whom were MEK members to death.

Over the course of a single summer, the Iranian regime executed 30,000 political prisoners associated with the MEK in the 1988 Massacre. To date, no one has been held accountable for this crime against humanity. Raisi is the second death committee member to hold the position of Judiciary Chief.

The U.S. Department of State and Human Rights Watch both condemned Raisi’s appointment to Judiciary Chief, citing his involvement in the “mass executions” of political prisoners in 1988.

The civilized world, UN, UNSC, and UN #HumanRights Council must condemn the atrocious killing of juveniles in Iran, a product of Khamenei’s Judiciary headed by the murderous mullah, Ebrahim Raisi, a Death Committee member in charge of the #1988Massacre of political prisoners

Sarah Leah Whitson, the Middle East and North Africa director at Human Rights Watch, commented on Raisi’s unfitness for the role of Judiciary Chief, saying, “It’s disturbing and frankly frightening that [Raisi] will be overseeing justice and accountability in Iran.”

She added, “He should be investigated for grave crimes, rather than investigating them.”