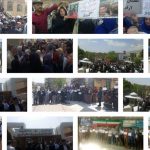 Teachers Assaulted by Regime Forces during Peaceful Protest in Tehran 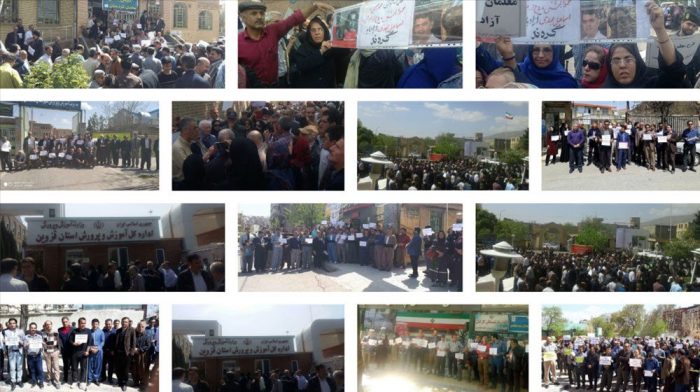 Teachers’ Day Protests across Iran asking for their colleagues that had been imprisoned during previous demonstrations to be released.

On Thursday, Iranian teachers in Tehran taking part in a peaceful protest in recognition of Teachers’ Day were attacked by security forces. The teachers had gathered outside of the Ministry of Education building in response to a nationwide call to protest from teachers unions.

“Imprisoned workers must be freed.”

“Your pain is our pain, people must rise up and join us.”

Teachers’ Day demonstrations took place in dozens of Iranian cities on Thursday, as Iran’s teachers used the annual holiday to renew their demands for better pay, benefits, and working conditions; to call for free, quality education for every child; and to once again demand the release of their jailed colleagues.

Protests took place in the cities of Isfahan, Divandareh, Tabriz, Mallard, Karaj, Hamedan, Kermanshah, Sanandaj, Qazvin, Marivan, Urmia, Yazd, Homayounshahr, Sari, Khorrmabad, Mahabad, Mashhad, Torbat-e Heydarieh, Kurdistan, Ardebil, and Javanroud, according to MEK sources inside Iran. Teachers in a number of cities are believed to have joined the protests after the MEK prepared the initial list. Teachers in these cities gathered outside of their local Ministry of Education buildings to protest.

Teachers and educational support workers in Kermanshah chanted, “Majlis [the regime’s parliament] and the government do not care about the teachers.”

“Children must receive a free and quality education.”

“We demand decent pay for our work.”

Teachers in Mallard carried posters and placards which read: “Free education is the right of every child.”

“We demand salary and wages above the poverty line for teachers and pensioners.”

Iranian teachers have protested dozens of times over the past year in response to substandard pay and working conditions and lack of freedom to advocate for themselves and their students. Iran’s teachers launched nationwide strikes in October 2018, November 2018, and March 2019. The regime refuses to address their concerns and arrested many of the organizers of the strikes.

The teachers have made a list of their unmet demands, which include:

Thursday’s attack comes a day after 35 protesters were arrested by Iranian security forces while participating in a peaceful demonstration in honor of International Labour Day.

Mrs. Maryam Rajavi, President-elect of the National Council of Resistance of Iran (NCRI) saluted the protesting teachers for standing up against the repressive regime and its forces. She tweeted:

“Teachers’ protests and their stand against repressive rgm forces showed public anger & disgust at religious dictatorship and demand for change; ‘People join us, our problem is your problem,’ ‘Teachers are imprisoned, extortionists are free’
#Iran”

She also called on international human rights groups and teachers’ unions to take action to secure the release of imprisoned teachers in Iran, tweeting: