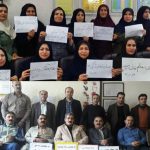 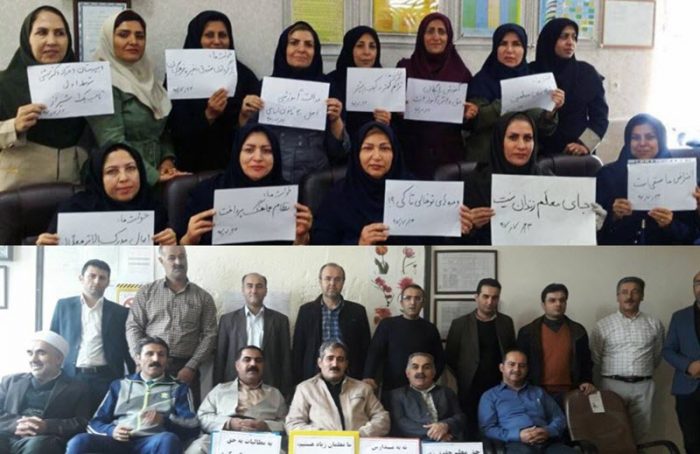 Nationwide teacher’s strike in Iran to protest the low pay, and the arrest of fellow colleagues for protesting regime’s repressive measure against teachers

Twelve teachers were arrested and another thirty were summoned and interrogated by police following the two-day nationwide strike by Iranian teachers.

By intimidating and arresting honorable teachers of #Iran , the clerical regime seeks to prevent their protests to demand their rights. I urge the International Community to take urgent action for freedom of imprisoned teachers.

The Teachers’ Trade Organizations’ Coordination Council released a statement on Thursday about the arrests. The statement, which was published on the trade union’s Telegram account, read:

“Activists were summoned to the Intelligence Agency, Revolutionary Guards Corps Intelligence Department, Protection Agencies and Security Police in almost all the provinces that participated in the strikes. At least 30 activists, including Eskandar Lotfi, a member of the Iran Teachers’ Coordination Council, were summoned and interrogated, while more than 50 threatening messages were received by activists.”

According to the Council, the November strikes were intended to pressure the regime to implement promised reforms and end mismanagement of the educational system. The teachers went on strike in spite of the regime’s threats and its history of arresting and imprisoning teacher activists.

The Teachers’ Trade Organizations’ Coordination Council condemned the crackdown on activists and the arrests of teachers, warning that the regime could face consequences for these arrests. They then called for the release of the arrested teachers and an end to its practice of arbitrarily. arresting union members.

Their statement read: “It is obvious that if the suppression continues, the Coordination Council deems necessary the right hold legal protests based on the constitution.”

The nationwide strikes by Iran’s teachers took place on November 13th and November 14th to protest low pay, the regime’s failure to implement policy changes, and poor benefits. The teachers also demanded the release of their colleagues who were arrested during the previous round of strikes in October.

The nationwide strikes spread quickly, with 40 cities taking part in the protest on the second day. Since the popular uprising began in Iran last December, the MEK has mobilized protests across the country. MEK’s resistance units, have allowed protests to grow and spread before the regime can suppress them. It has also allowed activists to gets news of the Resistance outside of the country to supporters.

The following is a list of those who have been arrested, according to reports from the Teachers’ Trade Organizations’ Coordination Council and other activist groups: