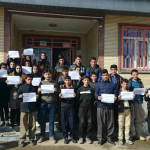 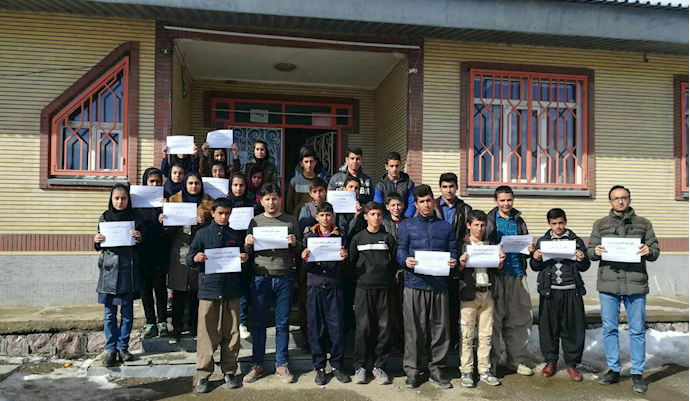 Iranian teachers in at least 31 cities across Iran joined a nationwide strike in protest to the Iranian regime’s repressive measures against teachers, the lack of their overdue payments and the unacceptable working conditions-In the photo, teachers of a secondary school in Kurdistan, joined by some of their students are holding signs to show their solidarity with the nationwide teachers’ strike- March 4, 2019

Teachers in more than thirty cities across Iran protested for the second consecutive day on Monday. The teachers, who plan to continue their sit-in tomorrow, are protesting low pay, low-quality insurance and benefits, and gross mismanagement of the education system. Iran’s teachers staged a number of strikes and protests over these issues last year, but their demands went unanswered, so they were forced to protest once again.

March 4 – #Iran
Latest images of teachers across the country protesting and on strike for the second day.#IranProtests pic.twitter.com/p9ZxRX0x6H

Teachers are among the many government employees and retirees who are actively protesting the regime’s corruption and mismanagement of Iran’s economy. As the rial continues to plunge in value, people from all sectors of society are struggling to provide for their families. Teachers’ salaries have remained stagnant despite skyrocketing inflation, making their financial situations particular dire.

The regime parliament is currently negotiating the budget for the upcoming Persian year, As the March 21st deadline grows near, teachers are worried that education will not be receive adequate funding and that teachers, government employees, and schools in general will continue to suffer due to the regime’s misplaced priorities. The regime spends billions of dollars every year exporting terrorism, funding conflict in the region, and building its nuclear program. Meanwhile, the people of Iran fall further into poverty. Iran’s teachers struggle to meet their basic needs, and protesters say that the Ministry of Education is doing nothing to help.

Support from the MEK and NCRI

The teachers of Iran have the full support of the MEK and the Iranian Resistance in their fight for fair treatment. Mrs. Maryam Rajavi, President-elect of the National Council of Resistance of Iran (NCRI), tweeted in support of the protesting teachers, calling on the Iranian people to join their cause. She wrote:

#Iran’s freedom-loving teachers have once again risen up to demand their rights. They have staged sit-ins to declare support for the imprisoned teachers.#IranProtests
— Maryam Rajavi (@Maryam_Rajavi) March 3, 2019

Cities Participating in the Protests

As of Monday, March 4th, teachers in the following cities have joined in the nationwide protests:

Last year Iranian teachers held a number of protests and strikes, receiving widespread support from the Iranian people. In May, October, and November teachers in a number of cities across Iran launched strikes that lasted for several days. The teachers of Iran have continued their protests despite retaliation and intimidation by the regime. Numerous activists and protesters have been imprisoned for speaking out against the unfair conditions faced by teachers, but the brave educators of Iran will not be deterred. The regime’s tactics of suppression are no longer effective in the face of organized resistance.