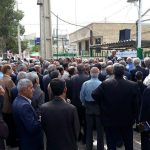 MEK Network-Teachers Rally across Iran: Political Prisoners Must Be Freed 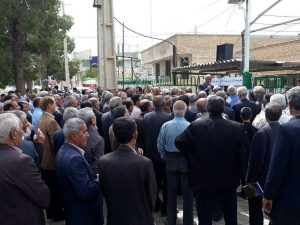 Teachers Rally across Iran: Political Prisoners Must Be Freed

On Thursday, May 10th, teachers across Iran gathered to protest their low wages, lack of benefits (including quality health insurance), and lack of job security. The protesters were comprised of both working and retired teachers who were tired of having their demands ignored. Protests in Iran have continued to grow in the wake of the uprising, which began in December of last year. The MEK (PMOI) activists were actively involved in organizing the initial uprising, but soon the people began to rise up and join the wave of dissent, joining the MEK in their demands for freedom and regime change. The latest protests by teachers took place in a number of cities and were witnessed by MEK activists inside Iran. The protests are summarized below:

Teachers in Tehran protested in front of Parliament and the regime’s Planning and Budget Organization. They chanted: “Efficient insurance is our absolute right!” and “Imprisoned teachers should be freed!” Teachers carried signs saying: “Teachers, Workers, Students, United!” “Salary above the poverty line is the right of teachers!” “Bread, Labor, Freedom, Educational Justice!” “Access to quality, free and fair education is the right of all children!” The protests were shut down by repressive IRGC forces, who arrested dozens of teachers and injured several, MEK network reported. Mercenaries beat the protesters and confiscated their phones. One woman suffered a torn eye as the result of the violent mercenary response.

Kazeroon teachers chanted: “Teacher dies, but does not accept discrimination!” “Imprisoned teachers must be freed!” One of the signs carried during the protest read: “The teacher’s place is in the classroom, not in prison!”

Teachers in Sari protested, chanting: “Free Imprisoned Teachers!” “Salaries above poverty line is the right of teachers and retirees!” “Standard schools are the right of students and teachers!”

Mamasani educators carried signs that read: “The teacher’s place is in a classroom, not in a travel agency!”

In Isfahan, teachers protested for free, fair, and high-quality education. They chanted: “The teacher is awake and hates discrimination and poverty!” “Our salaries are paid in Rial, while the costs are in Dollar!” “We don’t want incompetent minister!” Protesters carried signs saying: “We demand that all forms of discrimination (ethnic, gender, religious, class) be eliminated from the structure of the educational system of the country!” “Independent and free form of organization is our right.”

Teachers in Marivan carried a sign condemning the suppression of teacher protests in Tehran.

Protesters in Kermanshah stated that the lack of attention given to education is the root cause of “poverty, injustice, discrimination and embezzlement.” They carried signs which read: “Independent organization is our absolute right!”

Speakers in Shiraz condemned theft by the government while teachers struggle to survive on insufficient salaries.

Teachers in Bushehr conducted a symbolic funeral for Iranian education.

In Khorramabad, teachers protested with signs reading: “Efficient insurance is the teacher’s right!”

A protest was held in Bojnourd, but repressive forces surrounded the protesters, preventing photos or videos from being taken of the gathering.

Thursday’s protests were only the latest in a series of demonstrations by teachers. Iranian educators have become more and more vocal about the deficiencies in the education system in the past few months, and their protests show no signs of slowing.