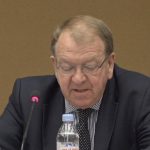 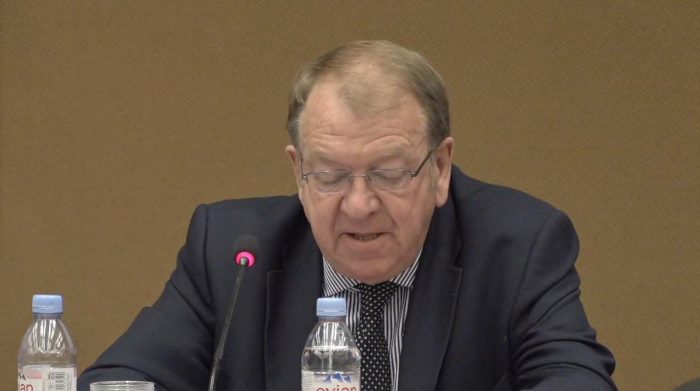 Archive photo: Struan Stevenson, former MEP, and coordinator of the Campaign for Iran Change (CiC), speaking at the Geneva Conference on the situation of human rights in Iran-March 7, 2019

The former member of the European Parliament Struan Stevenson published an op-ed for UPI on Thursday, April 25. He used the opportunity to urge the US government to maintain its application of financial pressure on the Iranian regime and end its reign of violence and tyranny.

Stevenson called President Trump’s decision to end waivers for Turkey, Iraq, India, Japan, and China that permitted them to continue purchasing Iranian oil “the final nail” in “the mullahs’ coffin.” For Stevenson, this was a necessary move to slash Iranian oil exports closer to “zero” goal.

My article in @UPI
Decision to cancel the temporary waivers that had enabled some countries to continue purchasing #Iran's oil has hammered the final nail into the mullahs' coffin#MEK @SecPompeo @AmbJohnBolton @realDonaldTrump @Maryam_Rajavi https://t.co/y0zd2IHSCI

He also welcomed US Secretary of State Mike Pompeo’s announcement of the US’s inclusion of the Iranian regime’s Revolutionary Guard (IRGC) on the US terror blacklist. Stevenson predicted that the move would drastically restrict the funds available to the Iranian regime.

“The IRGC controls almost 90 percent of the Iranian economy, so it will be virtually impossible for anyone to trade with Iran without breaching US sanctions or facing severe penalties for dealing with a listed terrorist organization,” he writes.

Stevenson outlines the next step for President Donald Trump. This would be the addition of the Iranian Ministry of Intelligence (MOIS) on the same foreign terrorist organization (FTO) blacklist.

“In June last year, a trained MOIS agent posing as an Iranian diplomat from its embassy in Vienna was arrested by German police and charged with handling a bomb to two other MOIS agents, instructing them to detonate it at a peaceful opposition rally in Paris,” he wrote.

The trained MOIS agent was Assadollah Assadi. He was working out of the Iranian regime’s embassy in Vienna.

Then, in December, the Albanian prime minister announced the expulsion of the Iranian ambassador and his first secretary. Edi Rama told his Albanian people that the pair posed a risk to the country’s national security. “Once again, these so-called diplomats were revealed as trained MOIS agents who had been plotting bomb attacks and assassinations of opponents of the regime in Albania,” Stevenson writes.

Freeing the Iranian People from the Shackles of the Regime

The Iranian public welcomed the IRGC listing with earnest. They are organizing protests against the mullahs and their bloody regime on a daily basis. This week, teachers and construction workers marched in Iran’s streets, next week it could be truck drivers, students, pensioners, farmers, investors, or any other segment of Iran’s repressed population.

My article in @UPI on #Iran's thuggish regime
The announcement by Trump to designate the #IRGC as a foreign terrorist organization is a further nail in the coffin for the clerical dictatorship#HumanRights #MEK #IRGCTerrorists @SecPompeo @AmbJohnBolton https://t.co/VNq58Wr2zt

“Iranians are sick to death of the repression and brutality they have been forced to suffer for four decades under the medieval fascist dictatorship,” Stevenson claims. At the heart of their grievances is the regime’s decision to spend Iranian funds on proxy wars and militia groups in Syria, Yemen, and Lebanon. At protests, chants of “forget Syria, forget Hezbollah, what about us?” ring out.

The mullahs use the IRGC as a tool of repression. They send the IRGC to crush protests and arrest dissidents. Following the nationwide uprisings orchestrated by the People’s Mujahedin Organisation of Iran (MEK) in early 2018, the regime arrested thousands of protestors. At least 14 died in regime custody under conditions of torture.

The most recent protests have focused on the regime’s inaction in the wake of recent flooding. Protestors denounced the regime’s inaction after flooding left at least 250 dead and many more without access to food and water. Instead of making the IRGC’s resources available to the rescue effort, including boats, helicopters, and shelter, the regime deployed mercenaries to keep civil order and prevent protests. Meanwhile, the Iranian people suffered.

“Some 80 million Iranians have lost their fear,” Stevenson writes, “They long for the freedom, justice, human rights, women’s rights, an end to the death penalty, an end to the nuclear threat and the restoration of a secular democracy that is being offered by the main and best-organized resistance movement, the Mojahedin e-Khalq (MEK).”

Stevenson concludes, “The Iranian population now recognizes that they have support in the West. They know that the U.S. administration will continue to turn the screw until this evil regime is replaced and peace and stability in the Middle East and worldwide can be restored.”