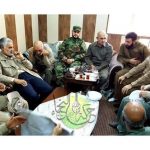 MEK-Iran:The Public Express Their Disgust at the Regime’s Use of Foreign Mercenaries to Quash Dissent 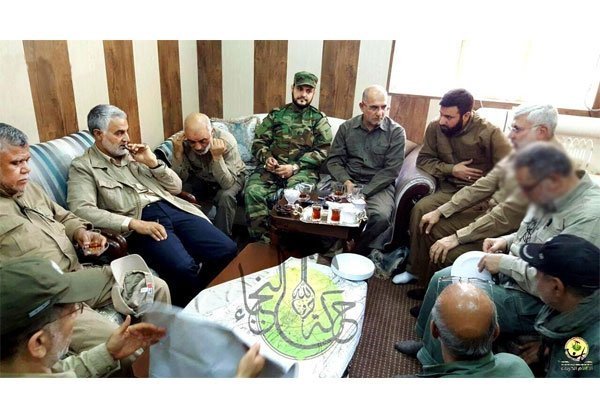 The photo distributed widely on the social media shows Qassem Soleimani during a meeting with several of the heads of Iraqi Militias including Abu Mahdi al-Muhandis, head of the terrorist organization, Hashd al-sha’abi.

The Hashd al-Sha’bi forces, closely linked to the Quds forces in Iran and the regime’s Revolutionary Guards (IRGC), were transferred to Ahvaz and Khuzestan province under the guise of providing aid to victims. However, their armored vehicles and military equipment have exposed the real reason they are lurking in Iranian towns and cities.

Following the deployment, the local Iranian youth has come together to demand the immediate eviction of all militia from the affected areas.

The provincial governor of Khuzestan, Ghloamreza Shariati, attempted to placate the Iranian youth. He claimed that “Iraqi officials with their heavy machinery” had come to help in the flooding but had since left the country.

“No military force has entered Iran. Only some Iraqi officials with their machinery and gears came to Iran, and are now gone,” he wrote on a state-run media outlet’s website.

In an effort to explain why the mercenaries were present in the country instead of simply providing resources and machinery to the flood-affected regions, the governor wrote, “Their machinery is expensive and they wouldn’t let us operate them.”

Few Iranians were convinced. When Abu Mehdi Al-Mohandes, the head of the Hashd al-Sha’bi forces arrived in Iran and toured Khuzestan province with Qasem Soleimani, the head of the Quds Forces, he was met with public outcry.

A Public at Their Breaking Point

On his travels around Khuzestan, Ghloamreza Shariati has also met fierce opposition from local residents. Crowds have chanted “we do not want you here, get lost!”

On one visit to a flood-stricken area, Shariati was confronted by a resident who could be heard asking the governor if he cared “only for Syria and not for us people here.” The governor responded with an angry outburst. He berated the resident, cursing at him and calling him an ignorant man. Shariati berated him and ordered him to leave the venue.

Abandoned by the Regime

The public’s anger is borne out of a profound sense of abandonment. In the wake of the flooding, the regime has been markedly absent in rescue and assistance efforts.

Flood victims have been left with limited access to food and water and cut off from the world. Rather than making the resources of the IRGC available, including helicopters, boats and emergency shelters, the regime has provided no assistance. Where it has been active, it has only engaged in suppression and the quashing of public dissent.

The President-elect of the Iranian opposition, Maryam Rajavi has urged the Iranian people to rally together in this testing time and offer support to flood victims wherever they can. While this is no substitute for a coordinated government effort, in the face of the regime’s inaction it is the best Iranians can hope for.