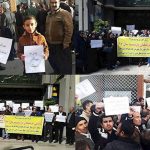 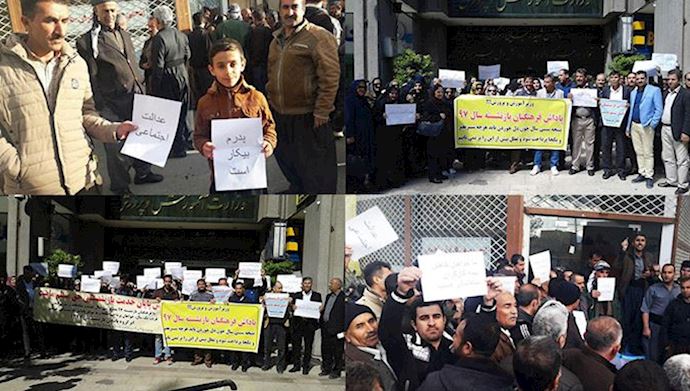 Teacher’s and retired teachers protest in front of the Iranian regime’s Ministry of Education asking for their unpaid wages to be paid.

On Wednesday, April 24, teachers in Tehran turned out to protest their unpaid salaries and appalling living and working conditions. In a protest outside the Iranian Education Ministry’s buildings in Tehran, protestors chanted, “we want our reward and it’s our legal right”.

Simultaneously, in Baneh, in western Iran, construction workers took to the streets to protest rising insurance premiums and rampant unemployment.

Protests like these have been widespread in recent months. The endemic corruption and the Iranian regime’s mismanagement of the economy have created an economic crisis.

Inflation at the end of 2018 was up by 34.9% on the previous year’s levels. The International Monetary Fund (IMF) expected inflation to increase to 40% in 2019. There have been reports of families selling organs to keep food on the table and make ends meet.

Beyond horrific: This is the #Iran the mullahs have created for its people:

Unemployment has also been rising and is expected to increase by a further 13 or 14% in 2019.

In the face of this economic hardship, the regime has done nothing to ease Iranians’ financial burdens. Instead of introducing policies to ease the hardship, it has plundered Iranian assets. Corruption and high import tariffs and tolls are further squeezing Iranian finances and increasing poverty.

To avoid paying public workers a higher salary, the Iranian regime has manipulated poverty figures. The poverty line, under which Iranians were considered to be living in poverty, still sits at 3 million Tomans, despite rampant inflation.

The regime, in an attempt to keep wages low and manipulate poverty figures, has not changed the official poverty line. The equivalent poverty line in today’s terms, after accounting for inflation, would be applied to salaries of less than 6 million Tomans. The regime is unwilling to amend its definition as it would have to increase public sector pay.

“Before this, I received 2.7 million Tomans since I had two children but in the new contract, my salary was reduced to 1.5 million Tomans,” a worker from Nishapur said.

While the regime buries its head in the sand and the economic crisis worsens, the opposition movement is growing stronger. Protests organized by the People’s Mujahedin Organisation of Iran (MEK) have swept across the country and spread to all sectors of Iranian society.

This week, it was teachers and construction workers. Next week it could be pensioners, students, factory workers, farmers, truck drivers and taxi drivers taking to the street. Nobody is exempt from the grip of poverty.

In the final weeks of 2018, there were protests almost every day from workers demanding unpaid salaries and protesting appalling working and living conditions.

The status quo cannot continue. The Iranian people must make their voices heard and say enough is enough.