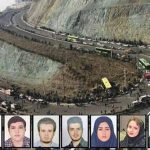 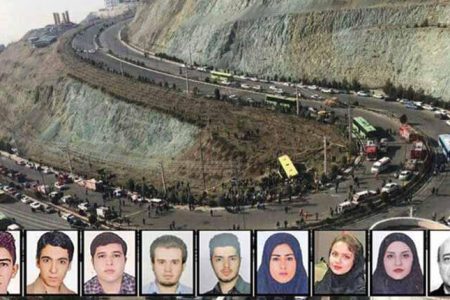 The University of Azad Bus incident that resulted in ten university students getting killed, and sparked large protests by students against the regime’s mismanagement and carelessness

On Monday, Iran Human Rights Monitor released its December report on human rights conditions in Iran. December was a brutal month in Iran due to the regime’s crackdown on political protests and strikes. In addition, the regime’s crumbling economy manifested on the deaths of several students this month.

According to state-run media, four young girls died in a fire at an all-girls preschool and elementary school in Zahedan on December 18th. A fourth girl died later in a hospital from her injuries.

Several days later, a bus accident killed ten students from Azad University’s Science and Research Center in Tehran and injured 28 more. The bus swerved off of a mountainous road, crashing into a cement barrier. University students blame the accident on the school’s aging fleet of buses.

Regime officials have been faulted for allowing the unsafe conditions which led to both deadly incidents.

Rouhani must be held accountable for executions in #Iran#FreeIran2018 pic.twitter.com/byE9MObmIi

The Human Rights Monitor Report lists 23 executions during the month of December. Those executions include:

The Iranian Supreme Court upheld the sentence of a juvenile offender who was sentenced to death at the age of 14.

Freedom of Speech and Assembly

An increase in protest activity in the month of December led to a crackdown on political activism by the Iranian regime. The MEK reported on a number of arrests of protesting steelworkers and factory workers in the province of Ahvaz in December. The workers were striking in protest of months of unpaid wages.

Further Arrests Follow the Second Night of Raids in Ahvaz

Security forces arrested at least 41 striking workers from the Ahvaz National Steel Group in a series of midnight raids on the workers’ houses. Workers were violently dragged from their homes, according to Iran’s Free Labor Union (FLU).

35 of the workers were later released, but seven remain in custody in Sheyban prison in Ahvaz.

Ali Nejati, a labor activist for the Haft Tappeh sugarcane workers, was violently arrested and beaten for “disrupting public order” and “spreading propaganda” against the Iranian government after participating in the sugarcane factory workers’ strikes. Nejati suffers from a heart condition.

The Human Rights Monitor Report listed several instances of cruel punishments by the Iranian regime. Fifteen workers from the Ilam Petrochemical Plant were sentenced to prison terms and lashes for “disrupting public order and peace” after participating in a sit-in outside of the factory. The workers were protesting the factory’s refusal to hire local workers and the layoffs of eleven experienced workers from the plant.

Poet, satirist and Telegram channel administrator Mohammad Hossein Sodagar was publicly flogged after being convicted of “dissemination of false information.” He received 74 lashes.

According to the state-run IRIB news agency, another unnamed man was publicly flogged in Zeberkhan District after being convicted of drug charges.

According to the Human Rights Monitor report, political activist Vahid Sayadi Nasiri died in prison after a 60-day hunger strike. Nasiri had been imprisoned repeatedly due to his social media posts and charged with “insulting the supreme leader” and “propaganda against the state.”

He began his hunger strike in October in protest of the conditions at the prison and his lack of access to a lawyer. He also said that he was being held along with ordinary criminals, which is a violation of his rights as a political prisoner. Nasiri was taken to the hospital before his death, according to reports.

Political prisoner Saeed Shirzad is being denied needed medical care, according to the Human Rights Monitor Report, and may lose a kidney as a result. Doctors at Rajaee Shahr Prison, where he has been held for the past three years, say that one of his kidneys has shrunk and the other has developed a cyst. His requests for hospitalization have thus far been denied.

The Office of the Prosecutor in Karaj has refused to authorize hospital transfers for Saeed Shirzad, putting him at grave risk of losing a kidney.
Shirzad had been imprisoned solely for his peaceful #HumanRights activities #Iranhttps://t.co/Vr0yK0ksIT

Lack of Due Process

The regime’s Appeals Court upheld the conviction against Mohammad Habibi, a member of the Iranian Teachers’ Trade Association (ITTA) for “assembly and collusion against national security,” “propaganda against the state” and “disturbing public order,” according to the Human Rights Monitor.

Habibi will have to serve at least 7.5 years of his 10.5-year sentence. He was also sentenced to 74 lashes and two years’ abstinence from political and social activities and was prohibited from leaving the country for two years.
Gonabadi Dervish lawyer Mostafa Daneshjoo was sentenced to eight years in prison for “assembly and collusion to act against national security, disturbing public opinion, and spreading propaganda against the system.”

Iran Human Rights Monitor received information that guards at Zahedan Central Prison in Iran’s Baluchistan Province broke the legs of political prisoner Arzhang Davoudi. The guards reportedly threw him down a staircase while torturing him, breaking his legs.

Being held at Zahedan Central Prison (SE #Iran) political prisoner Arzhang Davoudi has not been heard of for more than six months. He has been held incommunicado since April & there has been no information about him ever since. pic.twitter.com/Yt90Cg5Bl4

Doctors have said the 65-year-old prisoner will not be able to walk again.

Freedom of Religion and Belief

Yekta Fahandej Sa’di was given an 11 year 9-month sentence for practicing her Baha’i religious beliefs by a preliminary court in the city of Shiraz. She was convicted on charges of “assembly and collusion against national security” and “propaganda against the state.”

#Iran, Evin Prison officials have informed #Bahai prisoner of conscience Azita Rafizadeh that she will not be granted prison leave if she does not renounce her faith. #HumanRights pic.twitter.com/InrgNdjXdQ

Baha’i faith member Ali Ahmadi was arrested for the third time. Ahmadi was charged with “propaganda against the state” for having a holy book in his home. He is currently being held in solitary confinement at the Kachouie Detention Center in Sari.

According to the Human Rights Monitor, Christians in Iran faced a severe crackdown around the Christmas holiday. 114 Christians were arrested in December, many of whom had converted from Islam.

According to Open Doors UK, those who were arrested had to report a history of their Christian activities and cut ties with Christian groups.

According to the Human Rights Monitor, regime authorities arrested at least twelve Ahwazi Arabs in Khuzestan Province in December. Most of the detainees were not allowed legal representation or allowed to contact their families.

At least three Baluchis were killed while smuggling gas and oil in Sistan-Baluchistan Province. High unemployment in the province has forced many people to smuggle gas in order to get by.

Sistan & Baluchistan Province, SE #Iran
IRGC units opened fire on two men and their vehicle. They sought to pick-up and deliver a load when they were targeted.
The authorities left the scene & locals began providing aid. pic.twitter.com/whEeCRxwi5

According to the Human Rights Monitor report, more than 20 Kurds were arrested in Kurdistan in December. Kurdish human rights activists report that some of those who were arrested for cooperating with Kurdish opposition parties were taken to the Revolutionary Guard’s al-Mahdi barracks detention center.

Security forces killed at least five porters through direct fire and wounded another 13.

A bill to increase the marriage age in Iran was rejected in Parliament. The bill would have banned marriages for girls under the age of 13 and for boys under the age of 16. Girls between the ages of 13 and 16 would need parental and judicial consent to marry. The bill fail due to “religious and social deficiencies,” according to Allahyar Malekshahi, Chair of the Judicial and Legal Committee of the regime’s parliament.

The Iranian Resistance movement represents the Iranian people’s desire for a republic based on separation of religion and state, and is leading the freedom movement towards building a society based on gender equality and respect for human rights.#FreeIran2018#Iran pic.twitter.com/UpLevd6yAF

The Human Rights Monitor report listed a number of arrests and convictions of human rights lawyers in Iran during the month of December.

Human rights lawyers Qasem Sholehsadi and Arash Keykhosravi were sentenced to six years in prison after being arrested at a gathering in front of the regime’s parliament in August, according to the ISNA news agency.

Human rights lawyer Mohammad Najafi, who is currently serving a three-year sentence for exposing torture in Iran’s prisons, was sentenced to an additional 13 years for an additional two charges.

Mohammad Najafi, a #humanrights lawyer in #Iran was arrested to serve a 3-year prison sentence for publicly arguing that local police tried to conceal the cause of a detainee’s death. He had said that he is determined to continue seeking justice for the victim. pic.twitter.com/jGWCwjLDGc

Human rights lawyer Amir Salar Davoudi has been detained by regime authorities since November 20th in Evin Prison and denied access to his attorney. His attorney believes that the charges against him are “propaganda against the state” and “insulting the Supreme Leader.” He may also be charged with “assembly and collusion to act against national security.”

The MEK and Iranian Opposition have made repeated calls for the international community to take action against the theocratic regime to end its brutal human rights violations. It is clear that these atrocities will not stop until the regime is toppled and Iran is free.