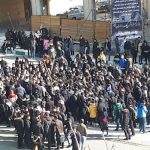 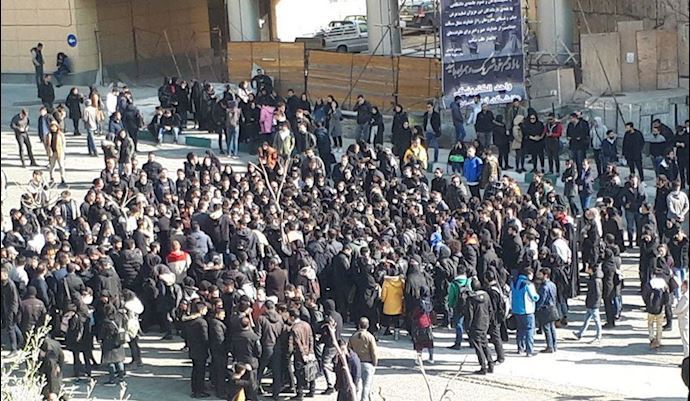 Students at the Science and Research branch of Azad University in Tehran held their third day of demonstrations on Monday. The protesters sat in the middle of the street, blocking the road. The students were protesting the bus accident last week that killed ten and injured dozens more.

A report on today's rallies in Tehran, #Iran, by college students protesting the Iranian regime's policies.#IranProtestshttps://t.co/W9Zg9BwUHM

Tehran University students also protested on Monday, marching outside their campus in protest of the crackdown against students at the Science and Research branch at Azad University

MEK sources report that the protesters chanted, “No fear, we’re all together!”

“Incompetent officials, resign, resign!”
“Facing our nation, with our backs to the enemy!”

The Tehran University students were also protesting the bus accident that took the lives of ten students. Reports from MEK sources indicate that protesters at the rally clashed with plainclothes security forces who were dispatched to prevent the protest from spreading. Further clashes were reported as security forces attempted to prevent the students from marching to Enghelab (Revolution) Square in Tehran.

The students chanted, “Coward, coward!” at the security forces as they continued their protest. Sources witnessed a security agent attempt to arrest a woman for protesting. Other protesters prevented her arrest and allowed her to escape.

The protests, which began on Saturday, are in response to a deadly bus crash and subsequent cover-up by University officials. The accident occurred when a bus carrying university students careened off a mountainous road and crashed into a concrete column, killing 10 passengers and injuring another 27. Officials initially claimed that the driver of the bus had a heart attack, causing the crash, but the coroner investigating the case later denied that claim.

The protesters say that university and regime officials did not do enough to prevent the crash. Iranian universities use buses that are old, in poor condition, and not well-maintained. The fleet of buses meant to serve Iran’s students are dangerous.

University officials at Azad University attempted to placate the angry students by washing the remaining buses in their fleet. They then claimed that these were new buses. The students were not fooled by this transparent and insulting lie and have demanded that university officials be held to account for their failure to provide safe transportation and for their role in the fatal bus crash.

According to reports, regime Attorney General Mohammad Jafar Montazeri visited Azad University on Sunday, hoping to stem the spread of protests. The students demanded answers from Montazeri and insisted that he be held to account.

Meanwhile, Mohammad Mehdi Tehranchi, the President of Azad University’s Science and Research branch, was so desperate to avoid students that he fled campus in his car, running over several students in the process. Two students were later  treated at the hospital for injuries to their feet.

The protesters are demanding that officials take responsibility for their negligence toward the students. They are demanding the resignation of Ali-Akbar Velayati, the chairman of the university’s the board of trustees. Velayati is a close advisor to regime Supreme Leader Ali Khamenei. The Iranian regime spends billions of dollars exporting terrorism and funding its ballistic missile program, but tran’s students are left in dangerous conditions, due to lack of funding.