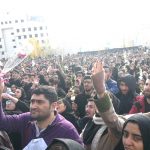 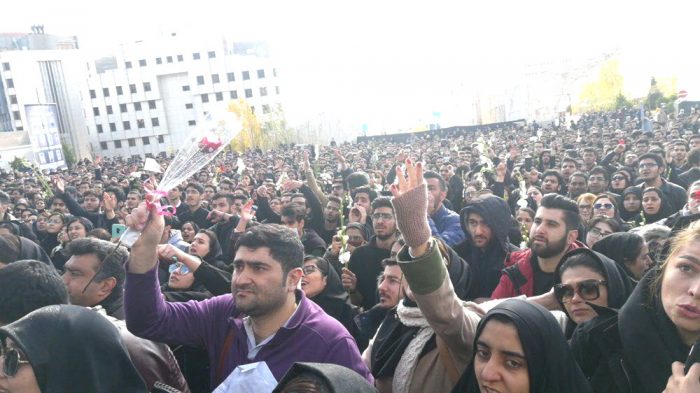 Protesters at Azad University gathered on Sunday, December 30th, for the second consecutive day to protest the loss of their peers in a tragic bus accident.

The students from Tehran’s Azad University of Science and Research turned out to protest the irresponsible plunder of public assets by the Iranian regime which has left Iran’s roads in dangerous conditions.

Traffic accidents are rampant, and the public infrastructure is ill-equipped to handle other disasters such as fires and earthquakes.

The senior management of the university is all under the direct control of the Iranian regime leadership. The head of the board of trustees of the university, Ali Akbar Velayati is an adviser and former foreign minister to Khamenei. The Supreme Leader’s office controls university affairs.

It was hardly surprising, therefore, that the university president avoided answering student’s demands and instead preferred to flee the university in his car.

The regime and university dismissed low ranking officials in the wake of the accident, but the dismissals did not affect the individuals responsible for the crime.

The Iranian resistance movement, including the People’s Mujahedin Organisation of Iran (MEK) and the National Council of Resistance of Iran (NCRI), expressed their sincere condolences to the families and peers of the students killed in the accident.

They also echoed the protesting students’ sentiments that the culprits responsible for the accident were not the low-level officials removed from their posts, but the regime’s leadership itself. “Due to astronomical plunders and expenditures on suppression and terrorism, this regime has caused the highest rate of casualties in such incidents”, a statement from the NCRI read.

A display of bravery

The students turned out despite a heavy regime presence in the form of plainclothes agents. The Ministry of Intelligence (MOIS) deployed Basij and Heraset agents inside the university to prevent the protests from spreading.

Dec 31, #Iran
Students of Azad University & people starting to hold a gathering outside Tehran university,that the plainclothes agents raiding the protesters. They say leave him and continued.#IranProtests#علوم_و_تحقیقات pic.twitter.com/GR2rBepbAV

In 2018, the MOIS has been relentless in its persecution of protestors. Following the December/January uprisings, the regime arrested more than 8,000 protestors, many of which were subject to brutal torture and prison conditions that amounted to severe human rights abuses.

But the protesters would not be deterred, chanting “students rather die than tolerate humiliation”, “Velayati, Velayati, you are responsible for this crime”, and “incompetent person in charge should be tried!” Other chants went even further, asserting, “You shameless killer!”

Several students also blocked the traffic outside the university. In response, the regime’s agents stopped students entering the university buildings to prevent the protest’s spread.