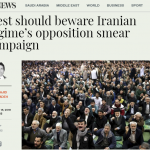 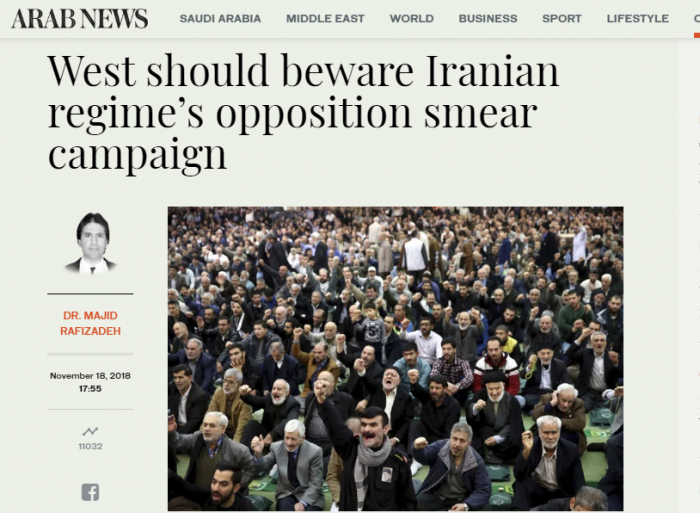 Article by Dr. Rafizadeh, responding to allegations against MEK, the principal opposition to the religious dictatorship in Iran

The Iranian people have been protesting against the oppressive regime since December of last year, and the widespread protests and strikes have grown and spread since then. The economic crisis in Iran, which has been exacerbated by the reinstatement of U.S. sanctions, has fueled the protest movement, led by the MEK.

A new article by Dr. Majid Rafizadeh describes the Iranian regime’s attempt to suppress this widespread uprising. Dr. Rafizadeh is president of the International American Council and an expert on Iranian and American foreign policy. His article explains the regime’s propaganda campaign against the MEK, as well as its attempts at terrorist attacks on the organization.

OP-ED: Some journalists are all too willing to naively, or perhaps maliciously, lap up every shred of misinformation about the #Iran opposition and augment every iota of pro-regime propaganda, writes @Dr_Rafizadehhttps://t.co/nSXUUooEEO pic.twitter.com/jaEC3ZR224

The Iranian regime is faltering under the weight of the Resistance and is in danger of being overthrown. The mullahs are willing to take extreme measures to suppress the ongoing rebellion by the people. Further, the regime sees the MEK as an existential threat and is willing to go to any lengths to destroy the organization. According to Dr. Rafizadeh, the regime has adopted a three-pronged approach to preserving its rule.

The first prong, according to Rafizadeh, is suppression at home. Iran Human Rights Monitor reported an increase in executions this month, which including a staggering 22 executions in two weeks. This strategy has backfired, and protesters have only become more willing to stand up against the repressive regime.

Rafizadeh’s article says that the second prong of the regime’s strategy to put down the uprising is to target the MEK overseas. Just this year, the regime has been implicated in three foiled terrorist attacks against the MEK.

Regime terrorists attempted to attack a MEK camp in Albania early this year. Regime diplomat Assadollah Assadi masterminded a foiled terrorist attack on an Iranian Resistance gathering in Paris in June and is now awaiting trial in Belgium. Two Iranian intelligence agents were arrested in the United States in August for spying on MEK members on behalf of the Iranian government. And recently, a regime spy associated with the regime’s ambassador to Norway attempted to infiltrate the MEK in Denmark in order to carry out an assassination. Three Iranian diplomats have been expelled from France and Norway over the past weeks.

To date, none of these attacks have been successful, leaving the regime with one final strategy. The third prong, according to Rafizadeh, is an old strategy that has been employed by the regime for the forty years of its reign: discredit the MEK through an organized campaign of misinformation and paint the only viable alternative to the mullahs as a terrorist cult.

Rafizadeh writes that regime Supreme Leader Ali Khamenei refers to the MEK as the “ foot soldiers” of the uprising and is desperate to find Western journalists and media outlets willing to spread negative information about the group. The Iranian regime has also set up false social media accounts and employed Iranian nationals to pose as journalists to spread misinformation about the MEK.

In August, Facebook detected and shut down 652 accounts operated by agents of the Iranian government.  Twitter followed suit, shutting down 770 accounts. The accounts were all found to have been used to spread propaganda and misinformation. Some of these pages specifically targeted the MEK. Smear articles about the MEK also began showing up in the U.S. and Europe around the same time. According to Rafizadeh, the articles were mostly written by  pseudo-journalists or people associated with the regime. “Former MEK members” with documented connections to the MOIS were often cited as sources.

#Iran #USA #UK
It is a shame that what are regarded as #progressive and #liberal newspapers should support a fascist, coercive, & expansionist theocracy….

Rafizadeh writes that the citizens of Iran are being denied a future and that a majority of the people of Iran have made a choice to rise up for change, despite the risks to their safety. He notes that half of the population of Iran is under the age of 30. Finally, he points to the National Council of Resistance of Iran (NCRI) as the only viable democratic alternative to the mullahs’ regime.

Rafizadeh ends his article with a quote from Voltaire, which he uses as a warning to journalists who repeat the mullahs’ propaganda: “Those who can make you believe absurdities, can make you commit atrocities.”