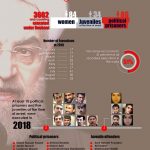 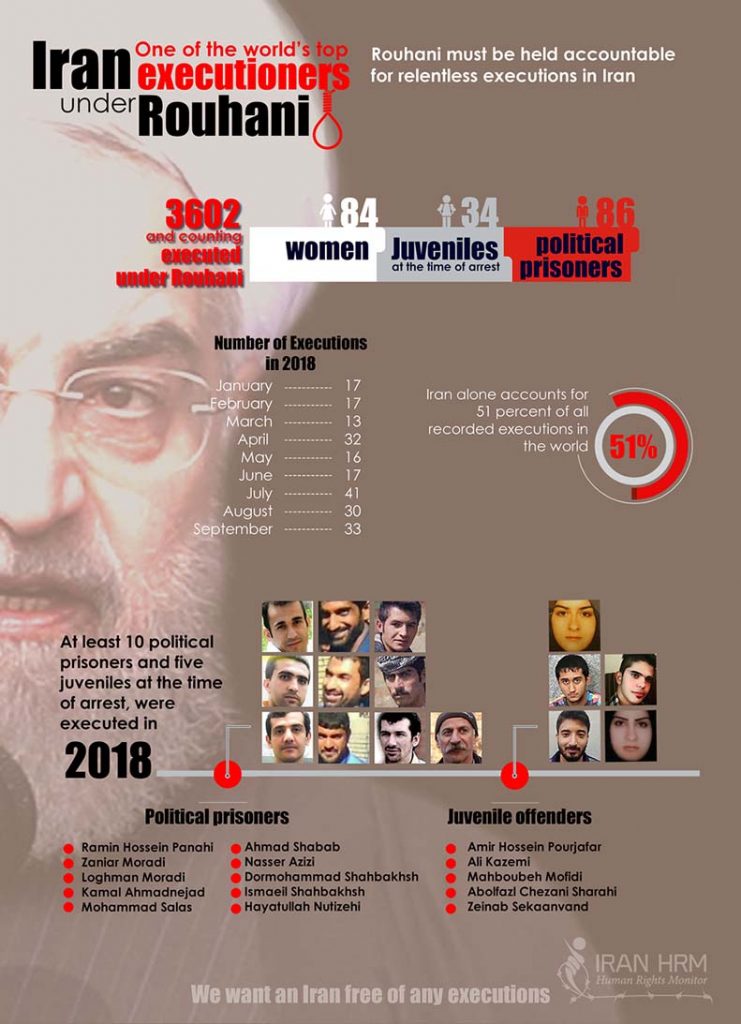 Photo Credit to Iran HRM: More than 3600 people have been executed under Hassan Rouhani-Zarif tenure in Iran.

Iran Human Rights Monitor released its annual report on the use of the death penalty in Iran on October 9th, 2018. The report denounced the clerical regime’s use of such brutal and barbaric punishments, which has put them among the most violent regimes in the world.

The World Leaders in Executions

The mullahs’ regime executes more people per capita than any other country on the planet. It executes a similar number of its citizens to China each year, but China’s population is more than 17 times larger than Iran’s.

On the occasion of the World Day Against the Death Penalty, Iran Human Rights Monitor draws attention in this report to the common use of the death penalty in #Iran https://t.co/pdvHWeTwAn pic.twitter.com/zAMLXjMdSl

What separates the clerical regime in Iran from other violent government is the ease at which it hands out capital punishment sentences. In Iran, political dissidents, religious minorities and juvenile offenders are commonly executed, with many of their crimes nothing more than political resistance.

The annual report from Iran Human Rights Monitor puts the total number of death sentences carried out under current President Hassan Rouhani at around 3,602. Of these, 34 were juvenile offenders.

Only four countries have executed juveniles since 2013. Unfortunately, Iran is one of them.

As well as the 34 juvenile offenders executed, a further 85 men and women are currently on death row for crimes they allegedly committed as a minor.

This is a clear breach of international law, which states that the death sentence “shall not be imposed for crimes committed by persons below 18 years of age”.

Since January, 223 people have been executed. 35 of these were executed in public. Iran Human Rights Monitor was quick to assert that these were conservative estimates. Given many executions take place behind closed doors, it is difficult to gather an exact figure.

For the mullahs, the death penalty is not a punishment but a way of controlling the population and preserving their grip on power.

As protests spread across Iran, affecting Iran’s key trades and industries, the mullahs are increasingly awarding the death penalty to suppress the Iranian opposition. Many are arrested on the charge of being affiliated with the People’s Mujahedin Organisation of Iran (MEK).

This was most recently on display in the Iranian truck drivers’ strike. After protests broke out across Iran’s major towns and cities, the mullahs were quick to threaten the strikers with execution.

Since January 2018, 10 political prisoners have been executed, despite intense pressure from international human rights groups calling for their release.

In the case of Ramin Hossein Panahi. He was executed after little more than a show trial over charges that he allegedly drew a weapon on agents of Iran’s security forces.

He was denied visitation from his lawyer and family. There was evidence that he had been tortured into signing a “confession” and was subsequently awarded the death penalty. In protest at his unfair treatment, Panahi went on hunger strike, even sewing his lips together in protest. He was executed on September 8th.

What makes Iran Human Rights Monitor’s findings all the more concerning is that many, as in Panahi’s case, are executed without a fair trial.

Short trials supported by confessions obtained under torture rob young Iranians of the opportunity to defend themselves. Without due process, many are convicted and sentenced to death in a matter of hours.

The conditions prisoners are held in are also inhumane and grossly unethical. Iranian death row wards are comparable to medieval scenes of torture. Many prisoners are subjected to solitary confinement for long periods at a time and are routinely tortured.

Those on death row are frequently restricted to bathing once every two months an using a toilet once every 24 hours. They are fed rations no larger than the size of the palm of a hand.

Iran Human Rights Monitor verified reports of guards pouring boiling water on prisoners, poking their genitalia with needles, pulling out prisoners’ nails, leaving prisoners in absolute darkness for up to 40 days, and hanging prisoners from their wrists or ankles.

Prisoners can spend up to a decade living in these conditions.

For the families, they hear little of the fate of their loved one. In many cases, they are only informed of the execution after it has taken place, robbing them of the opportunity to say their goodbyes.

To add insult, the regime often forces the families to pay for the noose or bullet involved in the execution of their loved one. If they do not pay, they do not receive the victim’s body.

Iran Human Rights Monitor took the opportunity to urge international human rights groups and advocates, to apply pressure to the Iranian regime to compel it to stop employing this cruel and barbaric use of the death penalty.

For a more detailed report, please refer to: https://iran-hrm.com/index.php/2018/10/08/cruel-and-inhuman-executions-in-iran/