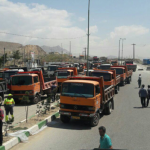 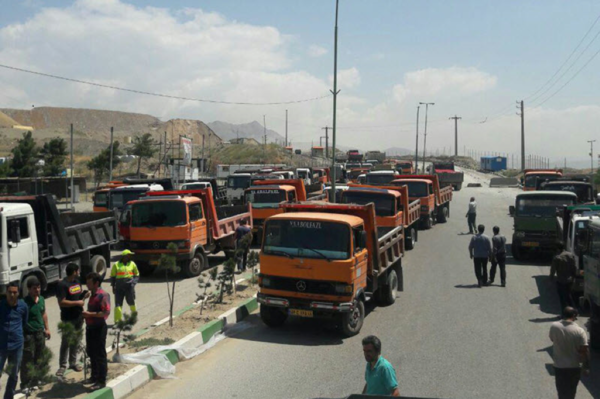 Iran’s truck drivers strike enters its third week, despite regime’s repressive measures including the arrest of dozens of drivers.

Despite threats to their liberty and lives, the truck drivers of Iran have continued their strike into its third week. The strike has spread rapidly across the country, now engulfing 310 towns and cities across the country, including Tehran, and towns in Fars province, Isfahan, Lorestan, West Azerbaijan, and Hamedan, amongst others, reports by MEK‘s network inside Iran.

The drivers are being charged with crimes such as “disrupting the flow of transportation” and “provoking drivers to strike”.

The regime’s Chief Prosecutor, Montazeri, threatened the striking drivers with execution two weeks ago. Mullah Larijani echoed his comments, asserting that those involved would be severely punished.

But still, in a remarkable display of courage, the striking drivers have turned out in force, with far-reaching results. Because around 90% of Iran’s goods are transported via the country’s elaborate network of roads, the truck drivers’ strike has been crippling for the Iranian economy.

The state-run news agency has used the success of the strike to attack the strikers. Fars News Agency accused the drivers of “causing dissatisfaction in the population”, and of harming the country’s economy.

But it is not the drivers harming the economy, it is the mullahs themselves. The strikers are protesting exorbitant insurance premiums and logistics costs, rampant corruption among regime officials, arbitrary tolls and taxes, and ever decreasing wages. If the mullahs took steps to end this rampant abuse of power, the striking truck drivers would return to work and the Iranian economy could continue to turn over.

The price of spare parts for trucks has increased by more than 600% in recent times. Many truckers cannot afford to replace tires, putting them out of work. Even when they do earn, the plummeting value of the rial means few are able to earn a livable wage.

When the truckers are working, road conditions have deteriorated to the point that many are unsafe and cause further damage to the trucks. Which means more expensive repairs, keeping truck drivers in a perpetual spiral of poverty.

In an attempt to break the strike, the regime made false promises. In footage released from Bandar Abbas Terminal, plainclothes regime agents can be seen disseminating falsehoods in an attempt to get the striking drivers to return to work.

The President-elect of the NCRI, Maryam Rajavi, pledged her support for the striking drivers. She urged the general public to stand with them in a gesture of solidarity.

The leader of Iran’s main opposition also condemned the regime’s repressive and violent response to the strikes. She cited the arrests and violence as a sign of the regime’s vulnerability.

Maryam Rajavi also reminded the public that the mullahs are to blame for Iran’s plunder and economic demise. Their thieving and mismanagement created this situation, not the brave Iranians taking to the streets in protest.