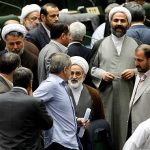 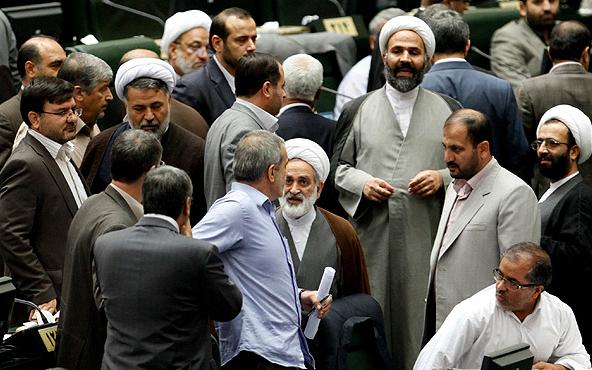 The Iranian regime’s parliament infighting as a result of the growing discontent against the regime and its corrupt leaders.

A wave of impeachments is overtaking the Iranian regime’s parliament, as tensions among the regime leadership have reached a boiling point.

Minister of Work Ali Rabi-ee was dismissed three weeks ago. The Ministers of Industry and Education are set to be impeached on September 11th. Cabinet Minister Masoud Karbasian is going to be sacked by next month.

On August 28th, President Hassan Rouhani was summoned to Parliament to answer questions about Iran’s economy. Rouhani admitting the Iranian people’s discontent towards the regime said: “Economic issues are of determinative nature. However, what’s more important now is that many people have lost their faith in the future of our Islamic Republic and are doubting its power.” Rouhani’s visit to Parliament came after months of squabbling and power plays between parties.

A report on how #Iran's regime is suffering following the grilling of mullahs' President Hassan Rouhani in the Majlis (parliament).https://t.co/8OmPvFhCKU

Government officials in trying to put the blame on others have become increasingly willing to acknowledge that Iran’s problems stem from decades of corruption and mismanagement by the mullahs and not from the sanctions by the United States.

Member of Parliament Qasem Mirzaei Nikou said: “The fraudulent ways of money-making runs in all branches of the government. Their corruption is endless, much like a seven-headed dragon.”

The reality is that the impeachments will not solve Iran’s economic problems because the system is rotten to its core. Iranian regime’s economic policy is not based on the rule of law; it is based on greed and corruption. Even MPs agree that replacing the cabinet will not solve these problems.

Exclusive to #PMOI/#MEK, April 26, 2018 – As the world prepares to mark International Labor Day; the real situation inside Iran has unfortunately gone gravely neglected. Poverty is spreading at an alarming rate and the #IranUprising sounded alarm bells for the ruling regime.#Iran pic.twitter.com/msekg1wqLz

On August 26th, Elias Hazrati another regime MP, commented on this issue: “We are in the month of August now. Sanctions won’t start until November, and its consequences won’t be revealed any earlier than the next 6 to 12 months. So, the current inflation of 19%, which is expected to go up to 40% by the end of the year, has clearly nothing to do with the United States”.”

Henchman, Mohammad Reza Badamchi another member of regime’s parliament, added: “In today’s society, one out of every six people is unemployed. In other words, close to 20 million of our youth, aged between 15 to 29 years old, have no jobs now.”

The cabinet, of course, only controls 50% of Iran’s economy. The other half is held by the Supreme Leader and the organizations under his power, primary the Revolutionary Guards and its affiliates.

Mahmoud Bahmani, another regime MP and the former head of the Central Bank, revealed last month: “A 2-year-worth of currency, accumulated from our exports, haven’t been returned to our country just yet. The bank accounts of the officials’ families are worth more than our currency held overseas. In March 2013, the liquidity rate was 435 thousand billion Toman, whereas today, it is more than 700 thousand billion Toman.”

#BREAKING
Tehran, #Iran
A man set's himself ablaze outside the city municipality office, most likely due to poverty & unemployment. pic.twitter.com/j2tfaOg6d9

Given the dire economic situation in Iran and the failure of regime officials to find effective solutions to address it, the Iranian people have grown more and more angry at the entire regime. Economic issues were the initial spark that led to the massive uprising that began in December of last year and continues today. People from all walks to life have taken to the streets, chanting, “Death to Khamenei!”

Khamenei you should be ashamed of yourself!”

Reformists, Hardliners, Game is Over!”

It has become clear that the people of Iran are tired of claims of reform. They are ready for regime change. Increasingly, protesters have looked toward the Iranian Resistance and the MEK for a viable alternative to the mullahs’ regime.

The regime faces many obstacles right now, but the largest and most insurmountable is the ongoing uprising taking place in the streets of Iran. The regime has been unable to suppress the protests, and it has been unable to kill off the opposition movement, despite attempted multiple terrorist attacks on the MEK this year.

Rouhani himself acknowledged the power of the protesters in a statement this year: “How did our country’s atmosphere suddenly change? It changed from December 26th, 2017; anyone who claims otherwise is only misleading people, in my opinion.”

The regime is fearful of its people because it knows the end is near. Overthrow is inevitable because the problems within the regime cannot be fixed. The people are angry, and the protesters cannot be suppressed. The regime should be afraid.