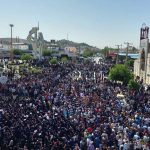 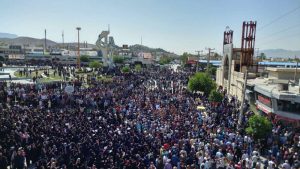 Since December 2017, Iran has been hit by wave after wave of opposition protests. The mullahs have done everything they can to steady the ship, but decades of repression and corruption have fuelled the people’s anger, and the swell of public discontent is showing no signs of letting up.

The Iranian people are confronted by a ruined economy, ravaged public institutions, and a foreign policy that hinges on funneling Iranian funds to terrorist and militia groups across the Middle East. Their tolerance for the systematic abuse of power and economic mismanagement by the clerical regime is running low. The people are taking to streets now, exercising their right to protest to have their voices heard.

However, protesting in public does not come without its risks. Since the protests began in December, the regime has shot dead more than 50 protestors and arrested over 8,000.

Despite the grave consequences, the numbers that have turned out to protests the regime’s leadership have been overwhelming. The public presence is having the desired effect. Reformist elements in the regime have compared the regime’s situation as to “a person standing on a floating bridge, waiting for disaster to strike”.

The protest movement has gone from strength to strength. In just the past seven days, protests broke out in bazaars, sports stadiums, and public squares across the country, with protestors chanting anti-regime and anti-Khamenei slogans.

Social media accounts from within Iran, including those from the Iranian opposition, the People’s Mujahedin Organisation of Iran (MEK), show demonstrators from all walks of life chanting in unison.

How deep is the crisis that the mullahs face at the home front? Take a look for 30 seconds and judge.
Thousands of spectators in Azadi Stadium in Tehran today, during the soccer game, chanting “Down with the dictator.” #Iran #IranRegimeChagne #IranProtest pic.twitter.com/DOpwoToEpQ

The regime is trying to hide the true extent of the protest movement. It is downplaying the severity of the demonstrations and blaming “Iran’s enemies” for the civil unrest. In doing this, the regime has created a paradox. It simultaneously asserts that the protests are small pockets of civil disobedience, triggered by the enemies of Iran, and that the MEK and the Iranian opposition play a key role in the movement.

In frantically denying the reality of the protest movement, the regime is demonstrating that it finds itself in a dire situation. Rouhani and Khamenei prefer to vilify the protestors, lie in the media, and ignore the rising tide of unrest than deal with the people’s grievances.

On top of the domestic landscape, there are problems for the mullahs within the regime. Cracks are beginning to appear as infighting undermines the strength of the regime. The regime is facing criticisms from both sides. Many elements in the regime believe the leadership should address the concerns of the people. Others are adamant that the regime must take a tougher stance in the face of growing public outcry.

Whether the regime tears itself apart from within or is toppled by public protest, the regime’s days are numbered. It cannot maintain the status quo. With every new protest, its situation looks more precarious, and in denying the severity of the situation, the regime only exposes its lack of control over the domestic situation.

The mullahs ship will sink in the storms of dissent.