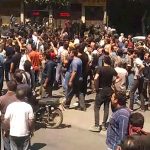 Khamenei Breaks Silence on Plunge of Rial and Protests, Blames Government for Crisis 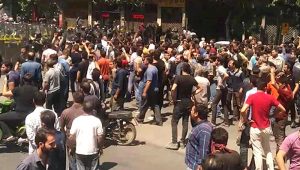 Archive-Protest in Isfahan against the Iranian regime’s corruption and the declining economic situation.

On Monday, August 13th, regime Supreme Leader Ali Khamenei finally broke his silence about the free fall of the rial and the swell of protests that have taken place across Iran since July 31st. His remarks made it clear that he has no solutions to the problems facing Iran.

Khamenei attempted to address growing concerns that the rank-and-file of the regime has become dissatisfied, saying, “Some wickedly propagate that the country is at an impasse and that there is no way out other than reaching out to some Satan or the Great Satan. Whoever says we have reached an impasse is either ignorant or his remarks are treasonous.”

Khamenei blamed his own regime’s president, Hassan Rouhani, for the catastrophic economic situation in Iran, confirming rumors of infighting among the highest levels of the regime. Khamenei feigned ignorance about his own regime’s decision to  plunder Iran’s wealth on nuclear missile programs and warmongering in the region. blaming these actions on Rouhani.

He also blamed Rouhani for failing to prepare for U.S. sanctions, saying, “Most of the recent economic problems are due to the measures taken within the country. If actions are taken more efficiently, more prudently, more swiftly and more firmly, sanctions cannot have much effect.”

Khamenei indirectly blamed his government for plundering “18 billion dollars of the country’s existing currency,” warning that the judiciary would deal with “those who caused the fall in the value of the national currency.”

Despite these attacks on his own government, Khamenei then backtracked, fearful that any change to the regime would weaken the already faltering regime further. He said, “Those who say the government must be dismissed are playing into the enemy’s plans. The government must remain in place and carry out its duties in resolving the difficulties with strength.”

Khamenei has a history of blaming others for his own failures. Khamenei spoke against protesters in June, blaming the MEK for anti-government sentiment, saying, ““Since day one after the revolution, hypocrite groups [the derogatory name regime uses doe MEK] have existed, making a stance against our Islamic state and… creating problems for us”.

Khamenei spoke out once again on Monday about the recent protests that have shaken the regime to its core, breaking his silence for the first time since the newest wave of protests began on July 31st. He described the widespread protests as “August incidents, which despite enormous financial and political investment by the enemy turned out to be very limited.” The week-long protests, which took place in a number of cities in Iran, including Tehran, Karaj, Isfahan and Mashhad, were widely attended by people from all walks of life. Chants of “Death to the dictator!” and “Death to Khamenei!” were heard on streets all over Iran.

Khamenei acknowledged that the regime is currently in a vulnerable state, saying, “We will not negotiate with America.” He went on to say, “We can enter into the dangerous gambit of negotiating with America only when we have reached the economic, political and cultural prowess which we envision…. But, negotiating now will certainly be to our detriment and is prohibited…. Even if we were to negotiate with the Americans, this being an impossible assumption itself, we would for sure never negotiate with the current (U.S.) government.”

With these words Khamenei made it clear that any change to the regime would lead to regime change.

Khamenei completely rejected the possibility of war, disappointing those who would would deny the people of Iran the power to take power back into their own hands, saying, “They raise the specter of a war. But there will be no war. There will definitely be no war.”

The people of Iran have made it clear they are tired of the regime’s meddling in the affairs of other countries. Protesters in recent demonstrations chanted, “Leave Syria alone, think of us!”  Despite the people’s opposition to the regime’s warmongering, Khamenei said, “We have helped the two friendly countries, Syria and Iraq in the face of threats by America and the Saudis.”

Khamenei’s remarks proved once again how little regard he has for the will of the people. And his willingness to publicly blame his own government show that the regime is crumbling from the inside.