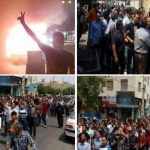 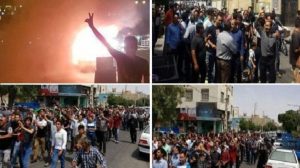 Last Friday and Saturday on August 3rd and 4th, protests continued in Iran’s major cities. Citizens from Tehran, Karaj, Isfahan, Mashhad, Shiraz, and Hamedan, among others, gathered in the streets to hear their voices heard.

In Gohardasht, Karaj, citizens chanted, “Khamenei, shame on you” and “let the country go”. In Qom, the rallying protestors adopted the slogans, “down with Hezbollah”, and “down with the dictator”. In the nation’s capital, Tehran, College Street hosted one of the city’s largest protests. The capital’s youth gathered en masse, chanting, “Iranians would rather die than tolerate humiliation”.

The regime’s response turned the peaceful protests into scenes of violence and aggression. In Gohardasht, the regime’s response was brutal. On Friday night, regime security forces closed all the entrances to the city and placed agents on rooftops. From their vantage points, the agents opened fire on the protestors below.  In the violence, a young man from Karaj, named Reza Oradi, was shot and killed.

The regime’s official statement on Reza Oradi’s death blames the deceased for his brutal and bloody demise. It read, “the assailant fired from inside the car 206 with a non-military weapon”. The statement once again attempts to posthumously cast a shadow on the victim’s character, a strategy the regime often employs after it has murdered innocent civilians exercising their right to protest.

The violence was not limited to Karaj. In Ghahdarijan, protestors clashed with security forces again on Thursday evening. The Basijis and anti-riot units deployed to the scene of the protests also opened fire on civilians with live ammunition. Many protestors lay wounded at the scene.

In Tehran, plainclothes officers arrested many of the demonstrating youths, and demonstrators at Vali-e-Asr intersection, Hafez Avenue, and College Bridge, clashed with the regime’s security forces.

The Protestors Have the Unconditional Support of the Iranian Opposition

The bravery and determination of the protestors is apparent. In taking to the streets to hold the regime accountable for its failings, the demonstrators are risking their lives and their freedom; a concept that is not lost on members of the Iranian opposition.

Leader of the Iranian Opposition, Maryam Rajavi, praised the brave protestors across Iran.

In a statement on Twitter, the sympathetic leader of the Iranian opposition offered words of encouragement to the protestors. She said, “the persistence of these young people against the Revolutionary Guards and the criminal plainclothes mercenaries as well as intelligence and security forces represent the determination of the Iranian people to change the mullahs’ regime and establish freedom and the rule of the people”.

Rajavi has previously urged her fellow Iranians to stand with the protestors. A strong, united front against the mullahs is the only way to bring Iran’s dream of regime change to fruition.