On Monday, 227 regime MPs called for the execution of detained protesters, and the next day, on November 7, Judiciary Chief Gholam Hossein Mohseni Ejei urged judicial authorities to speed up the prosecution and sentencing of arrested protesters. They blame thousands of protesters for defending themselves, despite the fact that security forces have killed hundreds of citizens on the streets alone.

On Tuesday, November 8, the Iranian people continued their nationwide uprising for the 54th day, following the death of Mahsa Amini, a 22-year-old woman arrested by morality police in Tehran on September 13 for allegedly violating the country’s strict dress code for women. Protests erupted in response to the event, which has since spread to at least 218 cities. According to sources from the Iranian opposition People’s Mojahedin of Iran (PMOI/MEK), the regime’s forces have killed over 550 people and arrested over 30,000. The MEK has released the names of 375 protesters who were killed.

“I defend the ruling system because if the regime were to change today, I would be one of the ten death-row officials without a trial,” Cultural Heritage Minister Ezzatollah Zarghami said on November 6.

Furthermore, authorities attempted to transfer two inmates for execution today early morning from Torbat-e Jam Prison in Razavi Khorasan province. Other prisoners, however, resisted prison guards in order to save their cellmates’ lives. Authorities severely repressed prisoners, set fire to several sections of the prison and transferred over 20 prisoners to Mashhad Prison. Nonetheless, the prisoners’ resistance to save their death-row cellmates provided significant momentum, revealing the regime’s vulnerability within its harrowing dungeons.

Over 550 people killed and more than 30,000 arrested by the regime's forces. The PMOI/MEK has published the names of 368 killed protesters.#IranRevoIution#آزادی_آزادی_آزادی pic.twitter.com/DeWvZbvDuO

Locals in Marivan gathered at the grave of Nasrin Qaderi, a protester killed recently by the regime’s oppressive security forces, and turned the ceremony into an anti-regime rally, chanting anti-mullah slogans such as “Death to Khamenei!” and “Damn Khomeini!”

In response to the regime’s atrocities and crimes, defiant youths torch the regime’s MP in Gonbad-e Kavus, Golestan Province, in the early hours of Tuesday. “If you harm even one protester, we will burn everything,” protesters said. 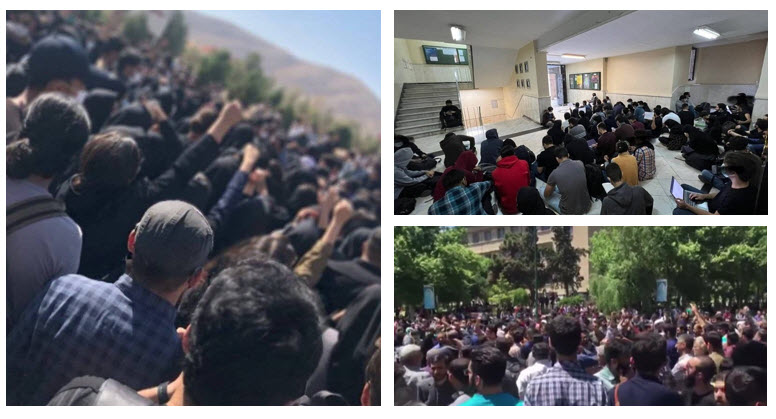 Students demonstrated at several universities, including Tehran’s Pars Higher Education Institute of Art and Architecture, and Tehran’s University of Science and Culture.

In Kerman, defiant protesters set fire to a pro-regime billboard, demonstrating that they are no longer deceived by the regime’s propaganda. Freedom-loving Iranians held rallies and exhibitions in Washington DC and Aarhus in support of the ongoing uprising, which has now lasted nearly 8 weeks.