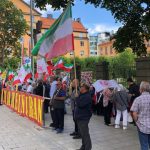 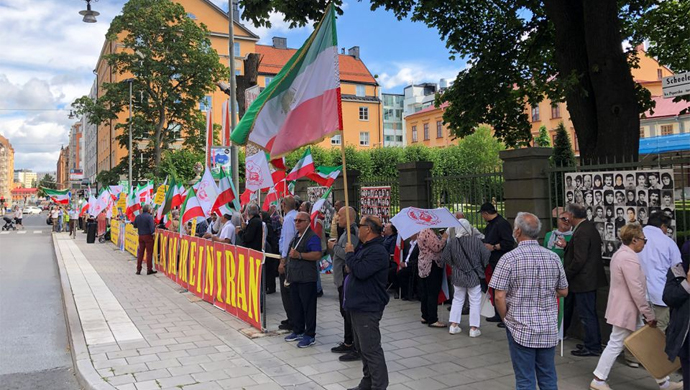 Iranian Resistance supporters hold a rally in front of a court in Stockholm, Sweden, where Hamid Noury, an Iranian regime torturer, and executioner, is sentenced to life in prison (Image source: Reuters)

On July 14, 2022, a court in Stockholm, Sweden, handed down its decision in the case of Hamid Noury, a former worker of the Gohardasht prison in Iran who was responsible for the torture and execution of political prisoners. Ninety percent of the 30,000 political prisoners who were killed in the summer of 1988 were MEK supporters and members, and Noury was on trial for his part in that massacre. For his murder and other serious violations of international law, the court sentenced Noury to life in prison. Numerous survivors, witnesses, and family members of the 1988 massacre testified at Hamid Noury’s trial, which lasted more than nine months and 92 sessions, and provided horrifying details of the atrocities carried out in Iranian prisons.

A sizable crowd of National Council of Resistance of Iran (NCRI) supporters had gathered as the court prepared to deliver its decision to remember the numerous victims of the Iranian regime and to demand justice and an end to the impunity that regime officials enjoy for their numerous crimes. Hossein-Ali Nayeri, a notorious “death commission” member who presided over the execution of thousands of prisoners following kangaroo trials, recently defended the 1988 massacre and claimed that the regime would not still be in power if it weren’t for those executions.

It is important to note that a number of senior members of the regime, including regime president Ebrahim Raisi, participated actively in the 1988 massacre. Iranians are hoping that Noury’s trial will serve as a model for charging and trying other members of the regime. When Noury was detained while visiting Sweden, the Universal Jurisdiction principle was used to hold a trial.  Noury initially asserted that he had been misidentified. He denied both his participation in the 1988 massacre and the existence of such killings.

July 14 – Stockholm
Freedom-loving Iranians & family members of victims killed in #Iran's summer #1988Massacre rallying outside the courthouse of former regime official Hamid Noury, accused for his role in the genocide that left over 30,000 dead.pic.twitter.com/4Q9q193hco

The prisoners were buried in mass graves in secret, and their families were kept in the dark. Early on in the assassinations, the MEK issued letters to the UN, Amnesty International, and other human rights organizations warning of the massacre of political prisoners.

The NCRI President-elect, Mrs. Maryam Rajavi, hailed Hamid Noury’s conviction as “a first step in the path of full justice.” She added that “comprehensive justice, of course, will be achieved when the main perpetrators of the crime, especially Ali Khamenei and Ebrahim Raisi, and other perpetrators, are put on trial in the courts of a free Iran or international tribunals.”

According to Mrs. Rajavi, the Ministry of Intelligence’s plot and its agents to sway the Justice Movement against the MEK were exposed by the Iranian Resistance’s extensive legal, political, and educational campaign over the course of 33 months and the court’s ruling. Strong depositions and compelling evidence provided by the plaintiffs and witnesses, particularly in Ashraf 3, were crucial in establishing Noury’s guilt and preventing him from eluding justice. In fact, if some of the court sessions hadn’t taken place in Albania, the outcome of the trial might have been different.

The decision on Thursday is a victory for the millions of Iranians who have endured the brutal mullahs’ rule for the past forty years. Future trials may continue in great numbers, starting with this one.