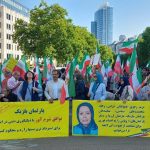 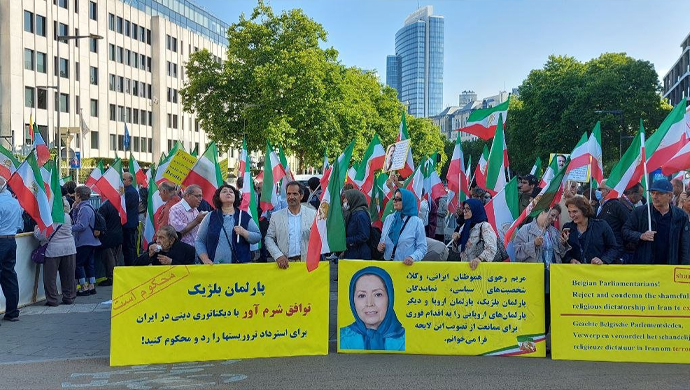 Iranian expatriates in Europe protested Belgium’s planned treaty to exchange prisoners with the Iranian regime that would render the release of a convicted terrorist of Tehran.

The security of thousands of Iranian dissidents, as well as Europe’s security, are in jeopardy as the Belgian parliament prepares to vote on a bill that would legalize prisoner swaps with the Iranian regime. In exchange for the release of a Belgian national being held hostage by Tehran, Assadollah Assadi, a convicted diplomat terrorist who was apprehended while attempting to bomb an Iranian Resistance rally in Paris in 2018, will be sent back to Iran if the bill is approved.

The deal’s supporters, Belgian officials of the Vivaldi government coalition, contend that if the agreement is not ratified by the parliament, the lives of Belgian hostages are at risk, despite the outrage of thousands of Iranians, politicians, lawmakers, and other dignitaries from around the world at this shameful submission to the Iranian regime’s blackmailing tactics. Other European nations, whose citizens are also being held hostage in Iran, have remained eerily silent regarding the agreement, implicitly endorsing it, and hoping that the precedent set by the treaty will enable them to negotiate the release of their own hostages.

Is this agreement, however, the conclusive solution to Tehran’s hostage-taking strategy? Will such a deal persuade the mullahs’ regime to stop detaining and arresting foreign nationals on flimsy and frequently absurd charges? The past is only a prelude. There is no indication that making further concessions to the mullahs regarding their hostage-taking and acts of terrorism will pacify them.

The past few weeks alone paint a vivid picture of what will occur if Belgium implements the deal with Tehran:

On July 7, representatives of Poland’s government acknowledged that Maciej Walczak, a professor at Poland’s Copernicus University, had been detained and arrested by Iranian authorities. Walczak was tried, according to Polish authorities, and given a three-year prison term on unspecified charges.

On July 6, Iran’s Revolutionary Guards claimed to have detained a number of foreigners, including the second-ranking British envoy in Tehran, for alleged spying activities like collecting soil samples in off-limits locations. Officials from the UK later refuted the assertion.

The Iranian regime’s judiciary announced in May that Ahmadreza Djalali, a Swedish professor being held hostage by Iranian authorities, had been given the death penalty, as the trial of Hamid Noury, a former prison official in Iran’s Gohardasht prison and the executioner of thousands of political prisoners during the 1988 massacre, was entering its final stages in a Swedish court. The Iranian government demanded Noury’s immediate release and transfer back to their country.

July 9 – London
Sixth day of protest rallies across the globe against a shameful deal between #Iran's regime and Belgium.#DontFreeTerrorists#No2Appeasementpic.twitter.com/SNN0lECMxM

At the same time, the regime doesn’t seem to be reducing its support for terrorism in the area. On July 7, the British Royal Navy announced that one of its warships had intercepted smugglers in international waters south of Iran early this year and seized Iranian weapons, including surface-to-air missiles and engines for cruise missiles.

These facts in no way suggest that the regime intends to change its provocative and aggressive approach to maintaining international stability.

The prisoner swap treaty will give the regime complete freedom and a way to scale back its hostage-taking and international terrorism policies if the deal is approved.

Terrorists with support from Iran will be able to visit any nation in Europe and engage in terrorism. They won’t have to worry if they are discovered and taken into custody because the regime is keeping both enriched uranium and foreign hostages in storage. Their release will be made easier, and when they are sent back to Iran, they will be welcomed there as heroes rather than criminals.

What Lessons Can #Belgium Learn That #France Never Did?#No2Appeasement #Iranhttps://t.co/yKr5fxvH9W

The Belgian parliament will make a significant decision on Thursday. Either it will reject the bill, uphold the law, and take one of the many measures required to halt the terrorist activities carried out by the Iranian regime in Europe. Alternately, it will pass the legislation, unleashing a wave of terrorism on European soil.