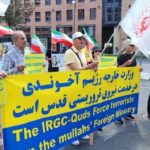 Written by Mohsen Aboutalebi on July 12, 2022. Posted in NEWS 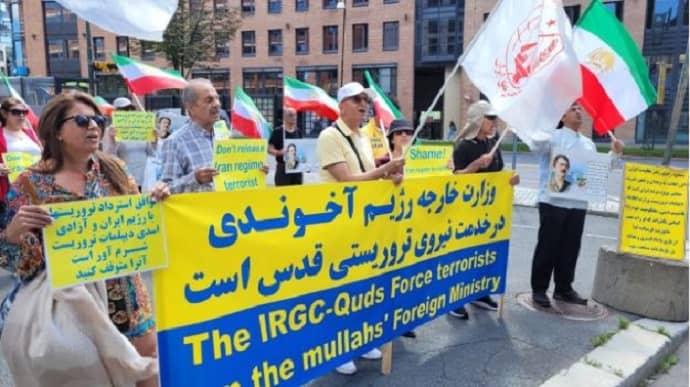 An extensive campaign by the Iranian Resistance has begun, with demonstrations held in front of Belgian embassies and consulates in five nations, including Sweden, Germany, Austria, the United States, and the United Kingdom. France, Norway, the Netherlands, Denmark, and Luxembourg.

The fight against the scandalous agreement between the Belgian government and the Iranian regime entered a new phase on Thursday, July 7, according to freedom-loving Iranians and supporters of the People’s Mojahedin of Iran (PMOI/MEK). After two days of contentious debate with government officials, the Foreign Relations Committee of the Belgian Chamber of Representatives voted in favour of a dishonourable agreement with the Iranian regime on Wednesday. On July 14, the parliament will vote in favour of the legislation once more.

Iranians and Iranian organizations from all over the world are simultaneously writing letters of protest to Brussels and Belgian embassies in various nations. In addition, ambassadors from numerous nations, lawmakers, scientists, and Nobel Laureates sent letters to Belgium’s government and parliament warning against the consequences of releasing the diplomat terrorist of the Iranian regime. The Belgian government has come under intense pressure as a result of the media outrage, and carrying out the dishonourable deal with Tehran has become very challenging.

The regime and its allies did everything in their power to conceal and carry out this deal without causing any major stir. They wanted it quickly ratified by lawmakers and to be discussed as a side issue in the parliament. However, the Iranian Resistance and people who value freedom in Iran stepped in.

In this regard, it is sufficient to note how the deal was covered by the media during the parliamentary debate. The statements made by the deal’s opponents embarrassed the Belgian government, leaving officials with no choice but to assert that Belgian citizens’ lives will be in danger if convicted Iranian regime diplomat-terrorist Assadollah Assadi is not returned to Iran, even though the bill received enough votes from across party lines.

According to a renowned Dutch newspaper, the justice minister actually meant to say that “you sometimes have to dirty your hands by dealing with the Iranian regime!”

The deal’s opponents objected to the justice minister during Wednesday’s parliamentary session and demanded access to every letter of protest the government had received from the American Congress and other parliaments. The minister acknowledged that more than 300 emails have already been received by the government but promised to make them available to lawmakers. All of the deal-related documents that had previously been kept secret will now be made public thanks to an agreement by the government.

The Iranian Resistance’s campaign to make public this deal, which was supposed to be executed in secret, has so far been successful. It has now been exposed for all to see, and rightly so, as the result will directly affect both the fight against terrorism and the state of global peace and security. The stakes have been raised for the Belgian government, which must now decide between dealing with the devil and joining the fight against state-sponsored terrorism.