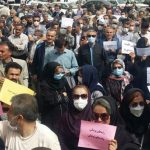 Iranian Regime has Turned Society into a Powder Keg 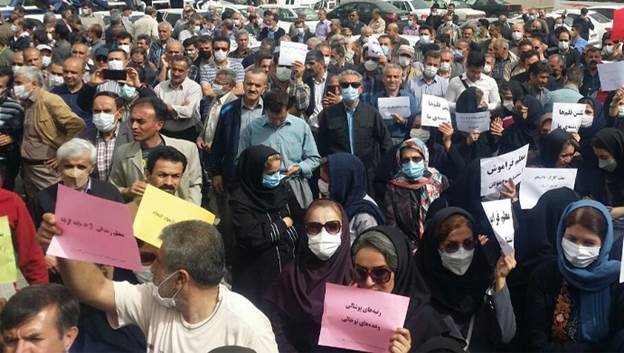 Iran’s regime is dealing with a restive population and protests that are spreading across the country and into all walks of life.

“The voices of teachers will not be silenced. A teacher yelled during a protest rally in Shiraz on May 1, one of 55 cities across Iran that saw demonstrations on International Workers’ Day. The chant, which expressed the Iranian people’s desire to see the tyrannical regime overthrown, was quickly picked up and repeated by other teachers and rally attendees.

Iran’s regime is dealing with a restive population and protests that are spreading across the country and into all walks of life. Many communities are rising and raising their voices to reclaim their most basic rights, from teachers to workers, students to civil servants, retired government employees to petrochemical workers.

Unpaid wages, salaries that aren’t enough to cover basic needs, poor working conditions, a lack of job security and healthcare, uncertain contract status, poor legislative support, and unfulfilled promises by the government and parliament are common starting points for protests. However, they quickly become political, with demands for the release of imprisoned activists and anti-regime slogans.

“Raisi you illiterate, the teachers’ movement is ready for an uprising,” the teachers chanted on Sunday, referring to regime president Ebrahim Raisi, who is regularly mocked by Iranians for his lack of academic credentials. “Imprisoned teachers must be freed” and “tyrants don’t belong in Iran” were among the other slogans, the latter being a clear call for regime change.

It’s worth noting that the teachers held their protest rallies despite the Iranian regime’s increasingly repressive measures. Security forces arrested more than 70 teachers and activists on the eve of International Workers’ Day to intimidate the public and prevent teachers from attending rallies. Dozens of other teachers were arrested on the day of the rallies. The teachers, on the other hand, stood firm in their demands, which they have repeated in several rounds of nationwide protests over the past year.

Other communities have held similar protests in response to the teacher protests. Workers in the oil and gas industry staged strikes and protests in several cities last week. They, like the teachers, have been repeating their demands over and over. They went on strike for months last year, demanding better working conditions, salary increases that reflected their difficult working conditions, and the dismissal of contractors who stole their money. Officials from the regime responded to their demands with broken promises, threats of dismissal, and arrests of activists. Workers are back on the streets a year later, with economic conditions even worse than before, to reclaim their rights.

This is a common thread that runs through various communities. All Iranians are aware that the mullahs’ regime’s top priorities are terrorism, ballistic missiles, nuclear weapons, surveillance, and repression. Workers have realized that after exhausting all legal avenues, the only way to obtain their rights is to raise their voices in protest. As a result, they’ve learned that as long as the mullahs are in power, they won’t be able to obtain their rights.

With the country’s economy deteriorating by the day and the regime doing nothing to improve people’s lives, tens of millions of Iranians have fallen into poverty, and they no longer have anything to lose. And they’ve realized that as long as the mullahs are in power, things aren’t going to get any better for them. This is why they are coming to the streets every day, and even the regime’s suppressive measures are not succeeding in quieting them.