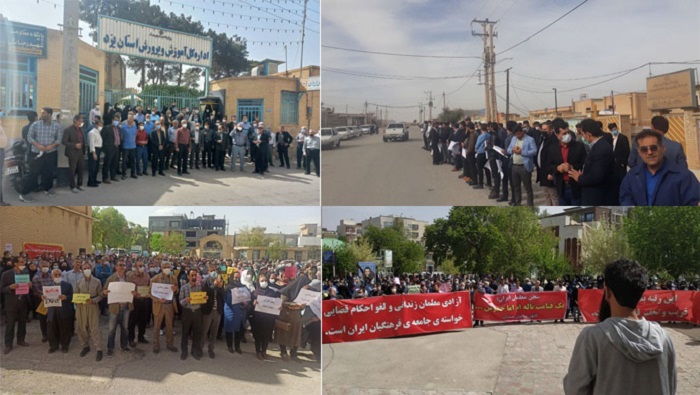 On May 1, teachers protested in dozens of cities across Iran, reiterating their long-standing demands for better wages and working conditions, educational reform, and the release of imprisoned teachers. Protests were reported in a number of cities, including Tehran, Shiraz, Tabriz, Isfahan, Rasht, Kermanshah, Khorramabad, Arak, Saqqez, Bushehr, and Ardabil. Working and retired teachers were among the attendees.

To prevent teachers from holding rallies, security forces surrounded and blocked the Majlis (parliament) and its surrounding streets in Tehran. The teachers staged a protest in one of the nearby parks.

Teachers are demanding that the government service law, the “Teachers Ranking” bill, be fully implemented and that salaries be adjusted in accordance with rising inflation rates and the depreciation of the national currency. Teachers are fighting for their most basic rights, such as an increase in their monthly wages above the poverty line, which is currently around 120-140 million rials. The majority of teachers are paid half of that amount. As per the regime’s own statistics, the income of teachers is 40% lower than the cost of living.

Teachers and workers in Iran have been denied basic universal rights, including wages above the poverty line, health care, social security, and the right to assemble and protest, according to their May Day statement.

So far, the regime has either ignored or responded to the teachers’ protests with force and repression.

Hundreds of teachers and labour activists have been arrested by the regime’s security forces in recent months. Some have been sentenced to prison or fined, while others have been summoned to appear in court. The regime is using all means at its disposal to intimidate the public and prevent protests. Nonetheless, the teachers have returned to the streets to reiterate their demands. These demonstrations take place against the backdrop of several rounds of nationwide teacher protests over the last year.

On Sunday, the teachers chanted a number of slogans, including:

“Imprisoned teachers must be released!”

“The [Education] Minister is a disgrace!”

“Iran is no place for cruelty!”

In videos obtained from the protests, heavy security presence can be seen in the cities where rallies are held. Security forces have attacked protesters in some cities. According to reports, at least 15 teachers were arrested during the protests on Sunday.