Written by Mohsen Aboutalebi on August 20, 2021. Posted in NEWS

Iran is currently in one of its most difficult economic crises in the last 50 years according to the People’s Mujahedin of Iran (PMOI / MEK Iran), and the National Council of Resistance of Iran (NCRI) analysis. When it comes to who is to blame, the regime’s officials appeal to international sanctions. On the other hand, it appears that the regime is being blamed for the economic catastrophe by the state-run media.

Inflationary pressures on products and services

On August 14, the state-run daily Aftab-e Yazd reported that, as the dollar exchange rate rose, inflationary pressures on products and services continued to rise alarmingly. Ordinary Iranians are finding it difficult to pay for food and other needs.

One of the state’s economists, Vahid Shaghaghi-Shahri, described Iran’s economic position as a “straw warehouse on fire.”

In a statement from Aftab-e Yazd, he explained the analogy by noting that while swiftly extinguishing the fire is not possible, the straw must be removed so that the fire does not burn the entire warehouse.

To make up for its budget deficit, the government began producing banknotes. The printing of banknotes has raised the liquidity rate, and because the liquidity rate in Iran is substantially higher than the output rate, it has resulted in inflation.

According to Shahri, the main problem with Iran’s economy is that liquidity growth is quite strong, reaching more than 40% according to the most recent statistics. He also admitted that the country’s management capacity for significant economic initiatives is weak as a result of poor human resource management and other systemic difficulties in the regime.

(PMOI / MEK Iran) and (NCRI): Economy, The Toman losing more than half its value.

The mullahs are harming Iran’s economy. The regime has been squandering national resources on terrorism and advancing its unpatriotic nuclear weapons program.

The Iranian people have seen how their possessions are being squandered on terrorism and other nefarious actions by the regime. As a result, their hostility toward the regime grows by the day.

Food prices in Iran have now grown by 71%

Eghtesad-e Pouya, a state-run media outlet, reported on a recent report from the Ministry of Welfare’s Center for Statistics and Strategic Information. According to the report, food prices in Iran have now grown by 71%, and the upward trend of inflation will only continue, raising fears that Iran’s economy may finally devolve into unmanageable hyperinflation.

Eghtesad-e Pouya acknowledged the regime’s economists’ and state media’s genuine worry by emphasizing that “economic and social crises have brought the country to a dangerous point, and if the crisis is not managed and controlled as soon as possible, the [regime] will enter a more difficult path.”

(NCRI) and (PMOI / MEK Iran): The people queue up to buy bread, while the government raises the price of bread by 35%. Bread has become the main food for a large portion of the society in Iran, as a result of poverty due to government corruption and dedicating the nation’s resources to fund terrorism and the development of nuclear weapons.

Demonstrations in cities across Iran

The rejection of the mullahs’ government is palpable, as evidenced by recent demonstrations in cities across Iran. The Iranian people place all responsibility for the country’s difficulties on the regime and will continue to demonstrate against the dictatorship and its corrupt policies.

The international community should realize that making any concessions to the dictatorship will just fuel the regime’s warmongering machine, with disastrous consequences for the entire world. 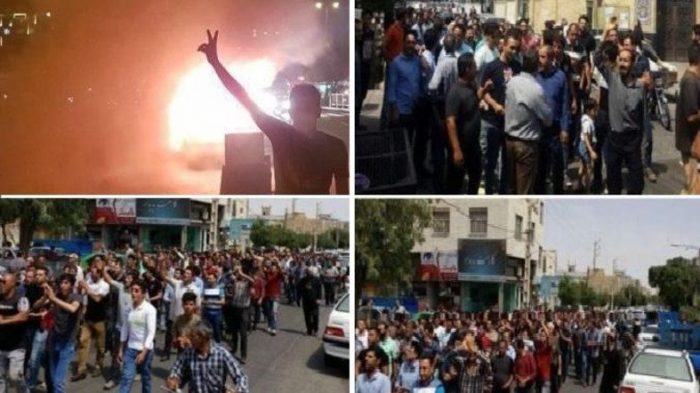